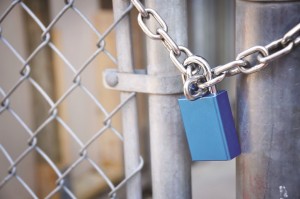 What do lighting, fencing and locking ladder racks have in common? They’re all part of the concept of Crime Prevention Through Environmental Design or CPTED (pronounced ‘sip-ted’). The majority of painting contractors are concerned about theft and burglary, and making sure loss of vehicles, equipment and supplies is prevented can be a big job. But CPTED can help, experts say.

“Ensuring that the location of vehicles, supplies and equipment is secure is part of what we call ‘opportunity reduction techniques’ that minimize the likelihood of something getting stolen,” says Chuck Sczuroski, a former police officer and the master trainer at the National Crime Prevention Council in suburban Washington, D.C.

A theft of anything you rely on every day isn’t just expensive and infuriating, he said. It impacts your livelihood.

And it’s not a small problem. According to the FBI’s Uniform Crime Reporting program, more than 8.6 million property crimes were committed in the U.S. in 2013. Property crimes include burglary, larceny-theft, motor vehicle theft, and arson. The terms larceny and theft are typically used interchangeably, but some legal experts have defined larceny as the unlawful taking of tangible property, and theft as the unlawful taking of tangible or intangible property, including intellectual property.

Larceny-thefts accounted for just under 70% of reported property crimes in 2013. The largest number of arrests for property crimes were also for larceny-theft, and those totaled more than 1.2 million. That still left millions of cases of larceny-theft unsolved. “Essentially, every business owner is vulnerable,” Sczuroski says.

But advocates of CPTED are trying to change that. The International CPTED Association notes on its web site that, ‘CPTED strategies rely upon the ability to influence offender decisions that precede criminal acts by affecting the built social and administrative environment.’

One of the first steps a painting contractor should take toward CPTED, Sczuroski advises, is building into a project estimate the time it takes to properly put away supplies and equipment at the end of each workday. “While it might be tempting to simply leave ladders, equipment and supplies in place—especially if they’re already indoors—at the end of the day, it’s more cost-effective to add the time that it takes to move everything into a secured location to any project estimate.” If you know you’d spend two hours doing that every day, add that time to a project estimate for every day you anticipate being on the job, he suggested. And then make sure that if you are moving equipment and supplies to somewhere on the customer’s property, that location is truly secure.

“Don’t assume a homeowner’s or commercial customer’s basement, for example, is necessarily safe,” he says. Ask who has access to the basement. If a homeowner suggests moving equipment to the garage or a backyard shed, make sure it can be locked from the outside. “An easily accessed garage or shed can be an especially vulnerable place after hours, because anyone who’s been watching the customer’s location will know where painting equipment and supplies are being stored. An unlocked outdoor shed is not the place to store your ladder.” Sczuroski also notes a painting contractor may want to consider reloading the equipment onto his truck or van at the end of the day, particularly if the vehicle will not be driven home, but rather, back to a secured shop.

For materials that can’t be moved at the end of the day, such as scaffolding, Sczuroski suggests putting up a barrier for the period of time crews won’t be nearby, to discourage theft or vandalism.

Audible security alarms can be affordably and easily installed on trucks and vans, he said. A ladder rack on the vehicle should be able to be secured with a high-quality lock. “And when it comes to equipment you need for a job, at least one person on each team should be designated as responsible for all the things that need to be secured,” he suggests. “If you have a number of people working for you, don’t let keeping track of equipment become an overwhelming task,” he says. “Just look at it from a team perspective and designate a security coordinator for each crew or team, who is accountable for making sure all equipment and supplies are properly put away. Impress on the designated person how important it is for ladders and equipment to be secure.”

Vigilance is key, painting contractors say. “Leaving trucks unlocked while they’re parked on a street with equipment in plain view is just inviting people to steal,” says Randy Fornoff, co-owner of MTS Painting and Property Service, Inc. in Mesa, AZ. “And if you allow a crew member to take a truck home, you have to be assured that the vehicle will be parked in a safe spot.”

Travelers (insurance company) recommends keeping written records of identifying information (such as serial numbers) for all tools and equipment. Post signs on all equipment with warnings that serial numbers have been recorded. Consider engraving identifying information in a hidden place on all equipment. As Travelers points out, paint can be stripped but engravings can’t. Engraved information will help police determine that an item is indeed yours if it’s recovered.

Travelers also recommends controlling access to building and vehicle keys by limiting the number of people to whom ‘key control’ responsibility is given and by maintaining a log listing the type of key issued, to whom, on what date, and for what purposes. Keep all unissued keys under lock and keep extra keys to a minimum, Travelers advises. And change your locks periodically.

WHAT ELSE CAN YOU DO TO PROTECT YOURSELF AGAINST THEFT AND LOSS?

Adequate lighting after dark is important but isn’t necessarily intended to keep you safe, says Sczuroski. Its purpose is to illuminate an area so that anyone nearby can see what’s going on with your property. Illegal activity can’t be hidden that way. The same reasoning applies to fencing, he says, even though it may seem counterintuitive. A tall block fence around a shop perimeter might sound like a better option to deter thieves, but the optimal choice for fencing is chain link or wrought iron, because it allows those nearby to see inside and outside of the fence and, thereby, keep an eye on your property.

Install cameras at your shop or warehouse that have recording capability, advises Sczuroski. “When you’re pricing camera systems, don’t go with the cheapest available … and make sure that whoever is advising you about security camera installation has experience with lighting so that the images captured by the cameras will be clear and bright. Add signs warning that surveillance equipment is on the premises. That alone could be a significant deterrent to theft and adds to the layers of security and theft prevention that offer optimal protection.” A thief may be more inclined to bypass a property with warning signs, he explained, and move onto a property without all those layers of protection. In CPTED circles, this is known as ‘territorial reinforcement.’

To further this concept, consider installing an alarm system inside buildings or yards, as well as in company vehicles, suggests Sczuroski. Fornoff, too, has installed alarm system in his 4,000-square-foot warehouse.

Some experts recommend hiring a security guard, especially if you have equipment expensive enough that it would be difficult to replace if it were stolen.

EMPLOYEE THEFT CAN BE A PROBLEM, TOO

Theft, unfortunately, isn’t limited to strangers who happen to come in contact with your vehicle or equipment. It can occur if you don’t hire trustworthy employees.

“Hire well,” Fornoff advises. “Do background checks and always check an applicant’s references.” If you’re looking to hire someone as a crew leader or a foreman, it’s imperative to check with former employers, Fornoff says, adding that he and his brother Jason, who together own their family business, consider their employees an extension of their family. “It all comes down to hiring people for their character,” says Fornoff. He adds that their company requires drug testing as a condition of employment and conducts random drug testing periodically after someone is hired.

New employees at John Neill Painting in suburban Philadelphia are always background-checked and drug-tested, says Suhaiba Neill, the company’s business manager and daughter of founder John Neill. In addition, she says, the company has installed GPS units in its dozen or so vehicles, “so we can keep track of all of our crews.” During peak season, she adds, the company has up to 35 painters assigned to projects.

Caron Beesley, a writer for the Small Business Administration, said that studies show perpetrators of workplace crime or fraud feel pressured or underappreciated perceive that management is unethical or unfair. So they rationalize their own behavior by convincing themselves that they’re owed something or deserve it.

How can you recognize possible criminal behavior? Here are some actions or characteristics, Beesley notes, that could indicate a problem:

• Not taking vacations; many violations are discovered while the perpetrator is on vacation

• Being overly protective or exclusive about their workspace

Travelers urges employers to clearly explain their policy to employees concerning gray areas, such as taking left-over supplies, personal use of company vehicles, or borrowing tools for overnight or weekend use. Travelers also recommends that employers ask employees to report theft to management via a phone number they can use after hours and on weekends.

WHAT KIND OF INSURANCE COVERAGE SHOULD YOU CARRY?

A contractor’s BOP can include:

• Inland marine insurance that covers all scheduled (i.e., items listed separately in a policy as being covered for an additional premium) tools and equipment as well as job-related materials while they are at a job site or are in transit to a job site

• Crime insurance, which protects an owner against theft by a third party

“Depending on your circumstances, a contractor’s BOP may be ideal for you,” Quinn says. “But if you have a larger company, it’s a much better step to purchase more comprehensive coverage through separate policies.”

PUTTING IT ALL TOGETHER

All of these measures are designed and intended to give you peace of mind by making it less likely that you, your company, or any of your employees will become a victim of theft or burglary. Having the right insurance coverage means if you do encounter a thief, you’ll have some recourse. “It’s all about being smart in regards to protecting yourself and your business,” says Sczuroski. “Anticipating and being proactive could save you from some major headaches in the future.”