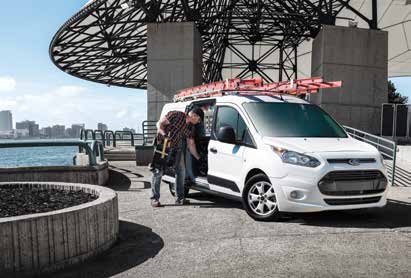 You think a lot about the tools and materials you need for your jobs—pressure washers, sprayers, brushes, paints, stains and specialty products. But what about the vehicle you drive to the jobsite? Obviously, a reliable truck or van is critical to ensure you get to work, but there’s more to it than that. We asked six pros for their opinions on what works for them and how to make the most of a work vehicle. Here’s what they had to say:

Based in Maine, Biddeford Painting handles both interior and exterior paint jobs, and has two Ford E-150 Trucks* for its exterior crews and a Dodge Ram Commercial Van for the interior team.

John Orgill, a crew chief with the company, drives one of the E-150s and says the van has plenty of shelving space and under-shelf storage, as well as drawers for small items like nails and wall anchors.

“We keep it stocked and, with everything organized, things aren’t all over the place.”

The vans can accommodate the painters’ power tools and ladders, and transport their bucket trucks as well. And, like many companies, Biddeford uses its trucks for advertising. “It’s a driving billboard,” Orgill says.

To maximize the vehicles for his team, he installed custom ladder racks and ordered American Van shelving. Organization is key, he says.

“We have one bin for rollers, one for covers, a custom bin for spackle knives, and more,” he says. “Everything is labeled.” And a piece of PVC tubing holds extension sticks.

They also haul a trailer with tools like a pressure washer, scaffolding setup, and power tools.

“One downside is that cube vans don’t have ladder racks, so we have an extension ladder on the trailer,” he says.

Jeff Eberts has owned his wallpapering business, Wallmasters, in Marshall, MI, for 38 years. A solo worker in a small town, Eberts focuses on residential work and historical buildings, including restorations. For his needs, a minivan with the seats removed is the way to go. He currently drives a Chevrolet Venture Van.

Eberts recommends keeping a piece of carpet on the floor in the back so buckets don’t slide around, and a small, heated box so paper or wallpaper paste don’t freeze.

Ideally, he says, pros should also have ladder racks as well as storage bins (he likes Rubbermaid) and shelving. He also notes that the most important item to have in any work van is a metal cage behind the front seats to protect the driver and passenger from potential flying debris.

“Organization is key to a work truck,” he says. “Think about the time you spend looking for two-inch screws. The time adds

“We built shelving units to store our equipment. And we lined the cargo area with wood so we can anchor equipment to the walls for safety,” says Miller, who started his company with his twin brother in 2005. “We also put a partition between the front seats and the cargo area … we don’t want things slamming into the driver or passenger.” And we installed a heavy-duty galvanized ladder rack on top of the van.

“The back-up camera was the most important thing, so you can see all around the van,” he notes. He also appreciates the hands-free speaker system, the GPS navigation, and the van’s low loading point. He knows a lot of pros like trucks, but he says, “we’re finding vans are the way to go.”

Opting for a used work vehicle versus a new one allows Stephen Lyon says to own it outright. The owner of Perspective Painting in Central Massachusetts drives a Ford E-250 Van* that had previously served as a fleet vehicle for an electric company.

It’s stocked with metal shelving, making it easy for Lyon to store supplies, and he can use any ladder rack he needs.

“Especially in New England with the snow and rain,” he says, “this is the best vehicle for me.”

Since 1996, ESP Painting has been serving the Portland, OR area with a primary focus on residential repaints. Owner Jeff Sommers has seven to eight two- or three-man crews working jobs, and reliable vehicles are critical.

“What I like about Chevy, in general, is that it’s easy to get parts,” Sommers says. “You can get parts at the junkyard, so if you have a resourceful mechanic, they can find anything quickly within a day.”

He also has Ford Transit Vans in his fleet.

The Ford Transit, he says, is a smooth ride with a great, well-protected back-up camera and a spacious cab. Sommers used a local Portland company to put custom ladder racks on the vans. The ladder racks have a roller bar on the back that allows the ladder to simply roll on top of the rack. “That’s a great feature,” he says.