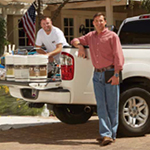 Many professional painting contractors have already taken the step of developing relationships with remodeling companies, while others may be on the fence, wondering whether there are enough benefits to make the effort worthwhile. “When a project is brand new, there’s a degree of pride for everyone who has worked on it,” says Judy Mozen, president-elect of the National Association of the Remodeling Industry (NARI) and owner of Handcrafted Homes, Inc. in Roswell, a suburb of Atlanta, GA.

“In addition, painters know they can count on remodelers to take care of the details of the project and can depend on us to pay them in a timely manner.”

Doug Imhoff recognized early on in his painting career that relationships with remodeling companies can lead to steady work and less worry. “There’s tremendous peace of mind even if I look at November’s calendar and there are no jobs on it yet,” says the owner of Imhoff Painting, Inc. in Centennial, CO. He adds, “I know that because of my association with remodelers, there’s work in the pipeline even if I don’t see it yet.”

Nigel Costolloe, founder and president of Catchlight Painting in the Boston suburb of Brookline, MA, has maintained relationships with remodelers for 20 years. “Remodelers can generate multiple business opportunities for painters every year,” he says. “The remodeler is the customer who keeps on giving.” Costolloe employs 16 painters and an office staff of three, and does business regularly with as many as 18 remodeling companies.

“If you try to do everything yourself, you will end up doing poor work,” says Don Van Cura, founder and president of Don Van Cura Construction Company, a Chicago-based remodeling firm that focuses primarily on residential remodeling. “If you surround yourself with talented people, it makes everyone look good. I value people who do good work.”

Remodeling companies require the services of many different trades, Mozen says, “because our crews are carpentry-oriented,” and typically, she explains, they are not as familiar with electrical and plumbing installation and painting as those who specialize in those services. Superior painting is critical, she adds, because “if a paint job is bad, your whole job looks bad, even if everything else has been done well.”

One of the best ways to develop relationships with remodelers, say painting contractors, is joining associations. After Imhoff moved to Denver from Minneapolis in 2005, he became active in NARI and the American Society of Interior Designers (ASID) as well as with Painting and Decorating Contractors of America (PDCA). He met a lot of remodelers through the nearly 28,000 members of NARI, he said. Today, he works consistently with about a half-dozen remodeling companies. “They’re the ones that run a tight schedule and always pay on time,” he notes.

Costolloe was fortunate enough to meet a carpenter who worked for a remodeling company shortly after he opened his painting business in Brookline, and he ended up doing a substantial amount of work for that remodeling company.

THE CHALLENGE OF TRADE SEQUENCING

Many remodelers recognize that a painting contractor’s preference is usually to come in at the very end of a remodeling job to paint, so other trades will not be in his way. Often, however, remodelers will ask a painter to come in long before the end of a project, and that has advantages and drawbacks.

“Sometimes we’ll ask a painter to come in a little earlier in the project,” Van Cura says, “to sand, prime and prep where necessary, and then come back at the end to do the finishing coats. It’s a lot easier to do more of the rough work when the work area is wide open, before the cabinets or hardware, for example, have been installed. There is less potential for issues if some of the work on the walls has been done before the end of the job.”

Priming and prepping midway through a project are fine, Costolloe said, but in his experience, remodelers sometimes have a hard time delivering a “clear, uninterrupted, and clean work environment” for painters ready to apply the final coats of paint. Frequently, he notes, “the place isn’t ready for a painter. A painter may show up to start work and there are carpenters and other trades still producing dust. It’s unfair to expect a painter to produce flawless work under those conditions.”

“You simply can’t expect a painter to come in and finish the painting and then have another sub come in afterward and mistreat the paint job,” Mozen says, adding that other subs shouldn’t be sanding anything near the painter, or even walking around or near him. “Some painters choose not to work with remodelers because they feel that they don’t treat their part of the project with enough respect.”

The solution, Costolloe says, is for a remodeler to work out a project time line for appropriate trade sequencing, specifying when the various trades will be able to work with few or no impediments. “That’s the way to avoid having the work area too compacted with tradespeople.”

“I liken the process of remodeling to an orchestra,” Van Cura says. “You have a lot of talented musicians and someone has to be the conductor. But it’s up to the ‘conductor’—the remodeler, the general contractor—to have a tactful conversation with the tradespeople about what’s in the best interest of the client. A pre-construction meeting good idea, because scheduling can be everyone’s greatest nightmare.”

BENEFITS OF A RELATIONSHIP WITH A REMODELER

Mozen and Van Cura, from their perspectives as remodeling contractors, and Costolloe and Imhoff, with extensive experience working with remodelers, all believe the benefits of a remodeler-painter association outweigh any challenges connected to such a relationship.

Another advantage of working with a remodeling contractor, she says, is that “we will always have selected the paint colors by the time the painter is ready to begin work. When a painter works directly with a homeowner, many times he’ll discover at the beginning of the job that paint colors haven’t yet been chosen.” When a painter works with a remodeler, Mozen says, “we pay the painter for every color sample he puts on a wall. That may or may not be the case when he works directly with a homeowner.”

Some remodelers, like Van Cura, prefer an ‘à la carte’ approach to bringing various trades onboard rather than asking each for an estimate and then submitting “one big, back-breaking, scary bill” to the homeowner. “We don’t use the typical model,” Van Cura says, “where everyone reports to the general contractor.” Instead, he works with homeowners to select subcontractors in the various trades, including the painter.

“We review specifications and change orders on behalf of the homeowner and help oversee the quality of the subcontractors’ work,” he says. He charges a minimal fee for coordination and then lets the trades communicate directly with the homeowner. “This provides more peace of mind to the homeowner, knowing how the costs are broken out.” His company handles the scheduling and coordination of subcontractors, he said, because “this is something that few homeowners want to deal with.”

From a painter’s point of view, “it’s easier to keep our work schedule full by collaborating with remodelers, especially in the winter months here in the Northeast,” Costolloe says. In the eastern part of the U.S., it’s hard for homeowners to get a painter to call them back in the summer months “but in winter,” he says, “nearly every painter in the area is trying to underbid his competitors because they’re desperate to stay busy.” By working with a remodeler, he added, that seasonal challenge can be addressed. “There’s a much higher likelihood there will be work for painters during the cold months.”

Painters who work with remodelers also have a better chance of being introduced to interior designers, architects and other residential remodeling professionals who may be able to connect painters with more work, Costolloe says. “Relationships with remodelers helped to establish me in the building and design community,” adds Imhoff, who employs nine painters and a part-time office worker.

WHAT TO KEEP IN MIND ABOUT WORKING WITH REMODELERS

According to Costolloe, one thing to keep in mind is that a painter who chooses to work with remodelers should expect to be treated as an equal partner, not as a subordinate. “A subcontractor is not a subordinate partner,” he notes. “It’s not acceptable to deliver adverse conditions to a painter, because the consequential adverse results make the client and everyone else unhappy.”

Costolloe also advises painters to become familiar with PDCA standards. “These protect painters in relationships with remodelers,” he says. “They’ve been tried and tested in court, so there is legal precedence for the standards to be upheld, and they specifically protect a painter from being exploited.”

He cites an example of a critically important PDCA standard, which states that the appropriate distance to properly evaluate a newly painted surface is from three feet, and under normal lighting conditions. “So if the homeowner comes in and says, from a distance of three inches, ‘I don’t like this finish,’ the painter can defend the paint job,” he says. “Or if a spotlight is washing down the wall and the homeowner isn’t satisfied with the painting results, the painter can reference the standard in his or her defense.”

Another PDCA standard to be aware of is the caulking standard, Costolloe adds, which says caulk is engineered to fill a limited width gap between similar or different substrates, but is not intended “to fix or hide the mistakes of other trades.”

Never work with a remodeler without a written contract, Imhoff advises, and make sure the scope of work is precisely spelled out. Insist that the schedule be identified, specifying which trades are expected to be on the job at which times.

“I have the utmost respect for the remodeling profession,” Costolloe notes. “The complexity of the business is impressive. Remodelers must juggle commitments, deadlines, trades and obligations. So I think it’s imperative that a painter step up his game when working with a remodeler, ensuring that there’s a consistent work standard with all of his or her crews.” He recommends that the owner of a painting company, at least initially, be on site with each crew working for a remodeler, to reinforce the level of professionalism expected.

“Remodelers want consistency, reliability and predictability,” Costolloe emphasizes, “A painter’s crew members have to be able to deliver an exceptional work product, and demonstrate expertise and a high level of skill.”