The latest in brush technology 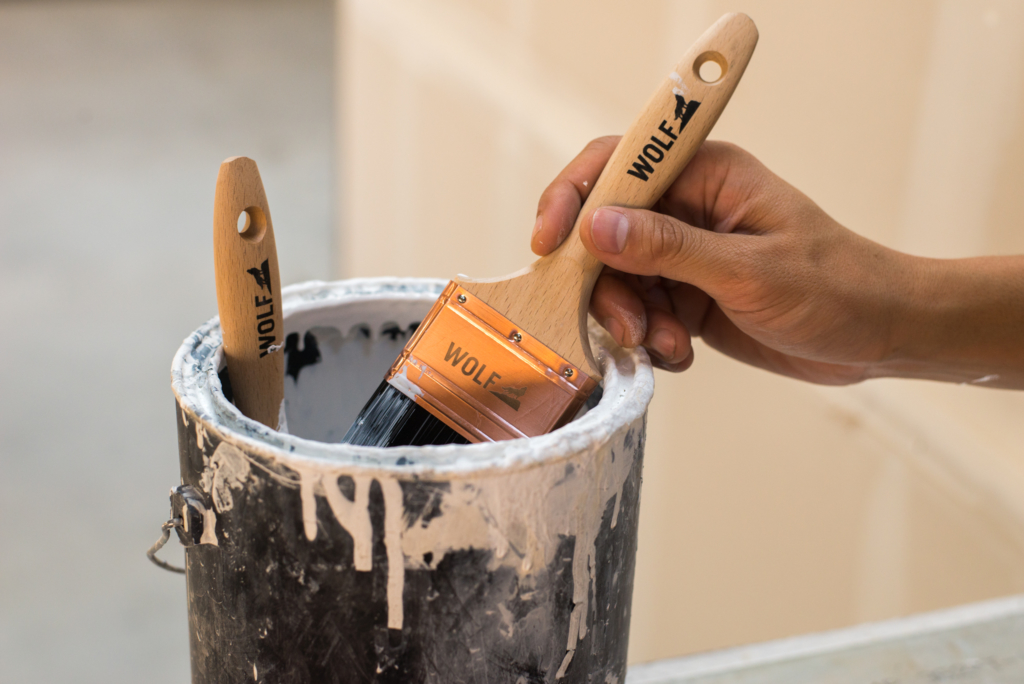 An artist by trade, Jon Cox, Sr. understands the importance of having the right tools for the job. That’s why the founder of Proform Technologies, Inc., which manufactures Picasso paintbrushes, also values the input of other professionals when developing pro-grade brushes.

In fact, he very much enjoys talking shop with paint pros who are passionate about which brush they prefer to use and why. One style may hold and release paint just the way one painter desires, while another painter may counter those claims with how a different brush can do the job better. Yet, another painter still may argue that it’s the bullet-proof nature of another brand that they admire.

Through the years, Cox has heard all the reasons why a brush makes the grade for paint pros, but he’ll still continue to hit up other pros for a conversation to help him inform his practice. “I think [research] is why we have that loyal following with painters,” he added.

Cox got into the business chasing the ergonomic market in 2001. Unfortunately, while he made a fantastic ergonomic brush—tested and verified by paint pros themselves, along with a university ergonomic facility—he was selling to a market that really wasn’t looking for an ergonomic tool.

“People just didn’t understand ergonomic design,” he said. “It’s like you needed someone there at the point of sale to explain it.”

After mixed sales results on his first effort, Cox did some product exploration. He knew there was plenty more to discover when it came to brush technology. After some tinkering, he developed a new acid-dipped brush using PBT (polybutylene terephthalate) filament, which really put Picasso on the map with pros. PBT filament is designed to maintain stiffness in hot, humid environments and is solvent resistant, making it easy to clean. It had long been used in makeup brushes. “We thought ‘it lays out great with makeup, so why not with paint?’” he said.

Cox later introduced an oval-ferrule, angled-tip combination that was new to the market, as well. Through the years, he has also paid close attention to the design of Picasso brush knots, making sure the cavity near the center of the brush effectively eliminates liquid buildup without annoying drips.

Cox is always working to improve the knot/ferrule area of the brush, he says. While Picasso hasn’t seen any major advancements in the past couple years, he’s far from stagnant when it comes to improving the product. His current research involves experimenting with unique plugs inside the knot in order to better guide the paint to one side of the tip or the other.

UP THE VOLUME WITH PURDY

Other manufacturers are also continually innovating and launching new product lines. Earlier this year, Purdy, which has been in the brush-making arena for nearly a century, launched its XL High Capacity brush line. It comes with a stadium-shaped ferrule and is designed for greater production with the help of more filament, increasing the pickup and release of a coating, explains Purdy Product Manager Marcelo Orchon.

“This would help a pro with any painting surface. A perfect example is when cutting in around a doorframe or trim, these brushes greatly reduce the need to go back and forth to the bucket, as they not only hold a lot of paint, they also release it evenly,” Orchon added.

All Purdy brushes are made with lightweight alder wood handles—the long, skinny rattail, the squared-off fluted, and the thick, round beavertail, as well as short styles—each to fit the variety of painting styles and pro preferences.

“Because the ferrule of the XL High Capacity is larger and wide, the beavertail handle is used, as it fits firmly in the palm for a comfortable feel and balance,” Orchon added.

Available in all Sherwin-Williams stores today, the XL High Capacity can also be found at other Purdy retailers starting this July.

Chuck Cline, brush development and manufacturing engineer with The Wooster Brush Company, offered some insights about the 165-year-old company’s newest offering, the Gold Edge paintbrush line. Gold Edge is a lower-cost option, Cline noted, similar to the company’s popular Silver Tip brushes, but the new model brings what Cline refers to as ‘a firmer feel.’ Gold Edge is designed with its combined white and gold CT polyester filament for added rigidity, allowing a user more control while working with thicker coatings.

“Some professionals even feel that a firmer brush allows them to be more efficient on the job,” Cline said.

The new line also offers an “exclusive tipping process that allows for reduced resistance for improved layoff with all paints, enamels, varnishes and polyurethanes. Overall, Gold Edge performs far better than its price point suggests,” Cline added. “When compared to other brushes available at its current price point, painters may swear that they should be paying roughly 30% more for the type of performance that Gold Edge delivers.”

The Gold Edge line comes as a result of Wooster’s constant communication with coatings manufacturers who are always on the lookout for materials that work well with the latest coating formulations. The company also relies on its district managers around the country to tap pros for field-testing opportunities.

“Members of our free Wooster Painters Program are often randomly selected to test new products out in the field and provide feedback,” Cline added. “Many of the changes that occur to new and existing products happen as a result of listening to the voice of the professional painter.”

For ArroWorthy, in the brush-making industry since the early 1960s and makers of the popular Rembrandt series, developing the best filaments that can handle a variety of coatings is always the goal, says Roland Kolilias, a VP at the company.

The Rembrandt’s popular semi-oval sash has been a hit with pros for years. The line’s NYLYN polyester filament brings a solid blend of durability and great pickup and release for a wide range of coating types. Its Finultra line with extra-long NYLYN filament, later released, has been known to deliver a superior finish with low-VOC paints, in particular.

ArroWorthy recently released its ORO line with its proprietary CHYLYN filament, which has “similar characteristics to Chinex and natural bristles,” Kolilias noted. The new line is touted for all latex or oil/alkyd paints and stains, and its easy cleanup. Chinex, a filament developed by DuPont, is a nylon synthetic bristle known for its balance between ruggedness and performance.

Recognized as a brush manufacturer for painters with discriminating tastes since the 1950s, in the past year, Corona launched its Performance Chinex series extra long brushes, which come in two styles. Its Atlas model is a square-edge wall brush and the Express is an angular sash brush.

“This was something we had been working on for some time,” said Michael Waksman, marketing director for Corona. “We felt we should expand our popular Chinex line with some new workhorse brushes that feature a longer trim length to hold more paint, saving painters even more time on the job—while still providing the Corona quality they’ve come to expect. Getting that extra trim length while maintaining the firm flex was a challenge, and we’re proud to say we got it.”

Waksman said his company’s research involves taking into account pro input from a variety of locations. A trend in one area of the U.S. may not hold true for painters elsewhere in the country, he has found.

“Different painters are going to want different features in their tools. A lot of times it is regional,” he said. “Painters in certain areas want particular filaments, or perhaps a firmer or a softer brush, and that is largely dependent on the climate and seasons of that area where they operate their business.”

It’s bold to venture into a market where so much expertise is already available. When it comes to paintbrushes, there are companies with more than 100 years in the business and others with decades of research and experience to pull from, so getting into the game now might seem intimidating.

However, every manufacturer shares the same need to evaluate its value proposition. When developing a less-expensive line, at what point has the quality been compromised too much in the name of attractive pricing? And at what point is a quality product simply too expensive? These are the questions every manufacturer faces, and also what drove the brush company, Wolf Paint Supply Co., into existence. The company is turning one year old this summer, says Michael Dinh, Wolf ’s brand manager.

Wolf is attempting to attract a new wave of painting professionals by offering a brush at an attractive price point that still looks and feels like the Picassos and Rembrandts of the world. The thinking is to offer something comparable in quality to the major manufacturers that is 25–30% less expensive, Dinh said. Wolf brushes include SRT nylon-poly filament, flag tips, and a built-in reservoir for good loading and release. The copper-finish ferrule on its BETA Pro series is both attractive and sturdy, and the company uses natural beechwood for its handles, and also offers some smaller, ergonomically friendly handles.

“We were really focused on having a paintbrush with high absorption and retention with a durable ferrule that keeps the bristles in place,” Dinh said. “The feedback we’re getting is that the brush has good balance and there’s not a lot of hand fatigue, which we love to hear.”

Wolf has gone with the direct-to-consumer approach by selling its product online, which is not a common way for the painting professional to shop, but Dinh said the company is working out deals with distributors and retailers to get its pro-grade brushes into hardware stores and other channels soon. The company has found momentum in Canada and the UK and is hoping to translate that into more sales in the U.S.

“Right now, our main goal is to get it into more hands,” Dinh added. “We want to make a brush everyone is proud of and wants to keep. Something they’d be proud to display on their tool wall.”

And let’s not forget—something professional painters are passionate about.