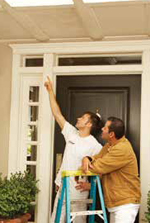 Carl Crowder has seen a lot of early paint failures in his day. The Colorado Springs-based paint Pro has more than three decades of experience in the business, and says far too many jobs don’t last very long due to shoddy prep work.

Early failures create an image problem for the paint industry as well. Reputable Pros like Crowder then find themselves in conversations with unhappy property owners who are skeptical about paying for more prep work to assure a longer-lasting job.

“Some jobs you can pressure wash and start painting. Other jobs you can be prepping for two weeks,” he said. “But if you spend time with quality prep and primer, it’s all quality in the end.”

Crowder and other experts shared some insights on their approaches to prepping exterior and interior surfaces that can help keep their customers happy and the referrals coming.

Before the prep discussion starts, it’s important to understand some basics about how paint adheres to surfaces. Paints tend to be pigment-rich, and a sound surface maximizes color and sheen, which is where the customer is focused, explains Tim O’Reilly, senior product manager for BEHRPro® services.

But a lot of surfaces aren’t really ready to give paint its chance to shine yet. In many cases, primer is needed. Primers are generally resin-rich. O’Reilly offers the analogy of a glue, and sawdust blend. Primers would contain more glue, and paints would contain more sawdust. The resin-rich, glue-like quality of primer allows it to effectively adhere to a surface, which promotes adhesion of the paint to the substrate as well.

“About 65% of all primers are used by Pros. They tend to use them because they can’t afford a failure. … It’s part of their tool belt,” said O’Reilly.

Crowder is one Pro who believes in the power of primers.

“A lot of painters bypass that and are relying on the paint to do the work. I’m old-fashioned,” he said. “There are a lot of good modern paints—self-priming paints—that stick well. I still use a good primer.”

Like a lot of other paint professionals, Crowder pressure washes exterior surfaces first, regardless of whether he is prepping wood, stucco, vinyl or aluminum siding, or anything else.

“We found that over the years, a building collects not just dust, but pollution and oily substances. You’ve go to get that stuff off,” he said. “You have to get off loose coatings/peelings. It could also require hand scraping, sanding. … Anything loose has to come off.”

When re-caulking windows or repairing surface cracks with a caulk or bridging filler, Crowder and Damon Caryofilles, of Damon’s Painting in Upstate New York, recommend using primer first, then caulk or apply filler, then primer again before painting.

Crowder also says using a quality caulk is important. More expensive caulks tend to adhere better and can even tolerate some moisture. The extra $20 or $30 a Pro may spend on a job for high-quality caulk is worth it, according to Crowder.

The three experts also agree that any raw-wood surface requires primer in order for paint to adhere. Crowder likes to use an oil-based primer for wood.

Wood adhesion challenges also occur when wood fibers have been exposed to heat and direct sun for some time. It’s important to sand and clean the surface properly before applying any primer.

New concrete requires 30 days to completely dry and cure. In that time window, adhesion is a problem because the concrete has a high pH rating, usually above 12, meaning the material is more alkaline, or base, than acidic. A base paint’s pH range is usually around 9.5.

Concrete pH levels drop slowly and inconsistently, added O’Reilly, which is why it’s recommended to wait the 30 days.

But construction schedules and other realities can sometimes get in the way. Some Pros will use a primer with a pH of 12 to paint a concrete surface within the first 30 days. Using a pH tester pen is also recommended to track the curing process and pH reduction.

One common adhesion problem for existing concrete is efflorescence, where water under the concrete substrate pushes salts and other minerals to the surface, creating a white film. If the surface is to be painted, this white dust must be cleaned off first to avoid a paint failure.

Fortunately, removing efflorescence is fairly simple. First, use a garden sprayer or a mop to flood muriatic acid across the surface. Follow with a baking soda and water mixture to neutralize the acid. Make sure to rinse all residue from masonry or concrete as well.

Concrete and stucco must also be checked for chalk. A general rule of thumb for testing a surface’s chalkiness or its dustiness is to run your hand across it. If it’s chalky, the paint has begun to fail and needs a chalk-binding primer before painting. If the concrete is dusty, it should be pressure-washed clean and primed before painting.

Dense, hard, glossy surfaces can also pose adhesion problems. O’Reilly recommends scuffing the topcoat of the surface, referred to as ‘mechanical adhesion.’ Chemical adhesion may also work, as long as the surface is clean and sound, which can save a lot of time and effort. Some of these trouble surfaces include older, glossy, oil-based enamels found on doors and trim, in addition to varnished woodwork, glazed bricks, anodized aluminum door and window frames, even Kynar.

Knowing the type of metal surface is also important. Ferrous, or iron-based metals like stainless steel, require an oil-based primer. Watch for rust, too, on ferrous metals, adds O’Reilly. He likes to use a rust-abating product called Hammerite after rust has been cleaned from a surface.

Nonferrous metals, like galvanized metal and aluminum, do best with a water-based primer. New galvanized metal can be particularly problematic to coat, added O’Reilly. Factory oils and other contaminants must be cleaned off without leaving any cleaner residue behind, which can be tricky. A lot of Pros will use mineral spirits, but many leave behind their own residue.

Caryofilles uses vinegar and water for a variety of metals.

“A little vinegar and elbow grease—it’s old school, but it works,” he said.

It’s a very common misconception, even among Pros, but prepping a surface with primers—even the best—does not kill mold or algae. The contaminants must be cleaned off before applying a primer. Many Pros will use a bleach-water solution to remove interior molds or exterior algae, then also use a primer and paint system with added mildewcides (interior) or algaecides (exterior) to keep the contaminants away.

The summer heat can cause mold and algae to spread. But heat, in general, can also compromise even the best prep work. When painting in direct sunlight, the top layer of the paint can dry quickly, while moisture is still in the film. This can cause unsightly bubbling and early paint failure as well.

It’s also important to watch surface temperatures. Most water-based paints and primers are intended to be applied when product, air and surface temperatures are between 50º and 90º Fahrenheit. Surface temperature can be deceiving too, said O’Reilly. The wall that was baking in the sun for a good part of the day is probably still quite hot even though it is now in some afternoon shade.

“I’ll just use common sense and put my hand on the wall. If it’s hot to the touch, I know to leave it alone,” added Caryofilles.

To the naked eye, drywall is a flat surface. But under a microscope, it’s a series of peaks and valleys, explains O’Reilly. Drywall is porous enough to accept just about any paint. But without putting primer on fresh drywall first, you could encounter an uneven film resulting from poor ‘holdout,’ where the paint soaks in and ‘builds’ differently across the surface, creating shiny and dull spots. Semi-gloss and eggshell finishes will be the most impacted and could produce an inconsistent sheen and/or color.

Existing drywall needs to be cleaned of contaminants as well. It’s something a lot of do-it-yourselfers and even Pros will overlook. The worst places in a home for cutting corners on prep are bathrooms and kitchens, adds Crowder.

Bathrooms and kitchens will have built-up soap scum on walls, some of which can be carried by steam to wall areas farther away from a shower or sink. Grease and other surface contaminants are huge adhesion barriers in these areas too.

“If the surface isn’t cleaned, sometimes you’ll see the paint will almost run off the wall,” added Crowder.

When it comes to cleaning indoor walls, some may attempt to use trisodium phosphate (TSP), an excellent exterior cleaner. TSP is an aggressive cleaner; when mixed with grease, it actually produces soap. The challenge using TSP inside is that it can’t be adequately rinsed. You really need to flood the surface, added O’Reilly. He advises using TSP outdoors only, where it can be effectively rinsed off with large volumes of water.

Every job is unusual and requires a certain level of prep. The Painting and Decorating Contractors of America (PDCA) has set industry standards for four different levels of surface preparation for paint projects. Here are some highlights of each level.

LEVEL 1: Considered a ‘basic’ prep level, it involves cleaning to remove surface dust, dirt and obvious loose paint, something most pressure washes will do. In general, this level of prep requires no alteration or patching of the substrate, but might involve some light wire-brush scrubbing in some cases, in addition to pressure washing.

LEVEL 2: Seen as ‘standard’ prep, this level involves, in addition to Level 1 prep procedures, an examination of existing coatings to measure their adhesion. Level 2 prep also uses an
adhesion-tape test performed at three different areas of the surface. This level may also include solvent cleaning, light sanding, caulking and patching. Surface profile differences should not exceed 1/8,” or 125 mils.

LEVEL 3: This prep level brings an added emphasis on appearance, where the first two levels had adhesion as a primary goal. This prep level may include filling or patching cracks in walls, texture matching, and thorough sanding to minimize sagging or running. Surface profile differences do not exceed 1/16,” or 62.5 mils.

LEVEL 4: Known as the ‘superior’ level, it also involves thorough filling and sanding of defects. Surface profile differences are not to exceed 1/32,” or 31 mils.

For a complete description of the four surface prep levels, visit pdca.org