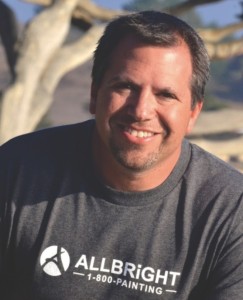 Josh Abramson is a man who knows how to follow up on a vision.

In 1987, at just 19, after dropping out of school, Abramson had a dream of working for himself. He enrolled in a trade school to learn the art of wallpapering and found he was very good at it. So he decided to try offering his services on his own.

He strategically placed a few hand-stenciled wooden signs on street corners in the San Fernando Valley, piggybacking on his grandfather’s successful drapery business name, Allbright. He wasn’t sure he liked the name then, “but today I’m incredibly grateful to have that as our company’s name, because our slogan has become, ‘Have an ALLBRIGHT day.’”

In the very beginning of the business, he would promptly respond to incoming phone calls by finding the nearest pay phone, hoping to be the first contractor to return a customer’s call. Slowly, his business expanded to include painting services, and he gradually stopped wallpapering almost entirely. But it was definitely a step-by-step process, he said. “The first five years were challenging in learning how to drum up enough business to support myself,” he said. “It took almost 10 years before I could hire full-time employees.”

NETWORKING HIS WAY TO SUCCESS

Abramson attributes much of his success to joining Painting and Decorating Contractors of America (PDCA) in the year 2000 through which, he says, he has been able to network with some of the best painting contractors in the country and learn best practices from them. “I wouldn’t be where I am today without this organization,” he said. “It’s given me the greatest opportunity to grow my business because I’ve learned how guys who’ve been doing this longer than I have work through their struggles and manage challenges in their business.” Through PDCA, he has made a best friend, another painting contractor who has, “inspired me to want to be the best contractor I can be.” One thing he learned by networking with other contractors is that, “as the company owner, I don’t always have to be the person who creates the estimate and be there to collect the customer’s final check.” He said he trains his crews to do that and trusts them to handle all aspects of a customer transaction.

In 2014, his company generated revenues of more than $2 million, and Abramson anticipates that in 2015, revenues will top $3 million. He credits business development activities for the expected growth of his company. In the last 18 months or so, he said he has actively engaged with homeowners’ associations, property managers and developers and, as a result, has started doing a lot of painting work for single-family and multifamily HOAs. “I knew this was something we needed to do to help the business grow,” he said, “and our efforts are working.” Today, about 50% of his business focuses on commercial projects; the other half is devoted to residential jobs.

BRINGING ANOTHER VISION TO LIFE

After participating as a vendor in Extreme Makeover: Home Edition on ABC in 2004, Abramson happened to watch the movie Pay it Forward and was struck with another vision.

“I thought, ‘why should I wait to be invited again to donate my services to someone who needs them?’ The concept in the movie really resonated with me and pulled the idea together.” In 2005, ‘Paint it Forward’ was born. Paint it Forward provides up to $10,000 of free painting services to those in need of them every year. Recipients of the program are identified and chosen through as democratic means as possible: Abramson and his staff invite residents of the Los Angeles area to submit stories that demonstrate a need for painting services. Then, his entire team of about 30 employees, along with customers and company fans on Facebook, vote on who or which nonprofits should be recipients in the program.

The initiative is, “really about trying to show others that if you do something nice for someone, that kindness can grow and continue on,” said Abramson who, as the company’s president, also calls himself the ‘chief solutionist.’

“We ask for (and get) 100% participation from our employees in volunteering our time. It’s the one time we all get together and work on one job together, and it’s some of the best times we have. As a team, we’re happiest when we’re doing something to help someone else who needs that help.”

Paint it Forward is an extension of Abramson’s and ALLBRIGHT’s ‘painting happiness’ philosophy. After being challenged one day to come up with one word to describe everything that makes his company unique, he concluded that, “happiness captures what is most important to us,” Abramson explained. “We’ve been building our culture around that. We work hard to ensure that our customers are happy with their choice in selecting us for their painting projects, and we enjoy the work we do with a ‘we’—not ‘me’—attitude.”

That culture of happiness and satisfaction has brought Abramson and his company plenty of accolades and attention. (See below for a list of awards.)

When he’s not running his business, directing philanthropic events, delivering speeches to painting contractors about how to become more community-minded, or accepting awards, Abramson is busy being what he calls an ‘idea guy.’

He has come up with ways to simplify estimating and help customers select their ideal color choices. “The typical process of writing an estimate is so inefficient,” he said. “You meet with the customer, guess at room measurements (or maybe actually take measurements), and then go back to a desk to figure out a proposal. I wanted a better, easier way.”

In 2005, relying on the combined utilities of Microsoft Word and Excel and a computer programmer to write the code, Abramson developed a software program called One Step Estimating (OneStepEstimating.com), which today is used by hundreds of painting contractors across the country. He has also designed software for a program that gives customers the opportunity to create their own personalized paint color palette.

And he owns two impressive branding phone numbers (1-800-PAINTING and 1-800-WEPAINT), which he has parceled out to painting contractors around the U.S. to grow their businesses. Software built into the numbers recognizes the area code someone is calling from and steers the call to a local painting contractor. “We’re growing a network of professional contractors who want to learn and use best practices,” he said. He estimates that about 65 painting contractors are currently using one number or the other.

His advice for other painting contractors? “First of all, make sure you have a real passion for being an entrepreneur so that you can overcome the challenges ahead. Write out your primary aim. Write a story about where you see yourself in five years, what your day looks like, what things you have accomplished, and how your business looks different five years from now. Then go and start working toward your goal. Five years is coming quick, so don’t leave it to chance.”