When Robert Criner, CAPS, GMR, signed up for the National Association of Home Builders Certified Aging-in-Place Specialist (CAPS) program, he expected to gain some knowledge. “But more than that,” he says, “I gained a new perspective on and appreciation for some of the most basic needs of an aging market.”

The president of Criner Remodeling specifically recalls a set of experiential exercises done during the lunch break of CAPS training. 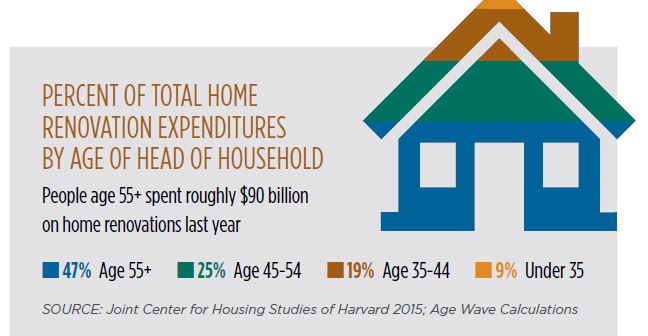 “They did things that made you experience what it’s like to live with some of the limits common to aging,” he explains. At one lunch, he wore a pair of glasses smeared with a thin layer of Vaseline to simulate failing eyesight. He also wore a device that restricted the use of one hand and, he recalls, “I wore earplugs. I was totally startled by how hard it is to live with hearing loss. In fact, I ended up not speaking to anyone during the meal because it was simply too much work.”

That experience has been invaluable to Criner’s design sense and business.

“That course taught me to be a better and more compassionate listener,” he says, “and I learned that there are some very basic things you can do in terms of design for a home—not just ones you’re working on for aging adults—that make the home safer, and literally doesn’t cost you a penny more to do.”

For example, simply making sure there’s a contrast between the color of countertop and a kitchen floor. “If someone with failing eyesight goes to put a glass down on a counter, you want them to see that they’re over the counter,” he explains. “And the cost to choose one color of counter over another is absolutely nothing. But it makes for a much better design.”

Criner now brings ideas he learned through CAPS to every remodel.

“It doesn’t really matter the age of the homeowner,” he says, “everyone is interested in making their home safer and more comfortable. So, if you’re replacing a shower, why wouldn’t you make the shower larger so that, if needed, you can put a seat in it so someone else can get in to offer assistance? Addressing both current and future needs in a design is a matter of common sense—and it makes good financial sense too.”

Criner, who has also had employees take the course, says the CAPS designation serves as a nice differentiator when bidding jobs, however, “more importantly, I’m simply a better contractor because of it.”