Deck Inspection: Improving the Look and Safety of Old Decks

Sean McAleer has seen it all when it comes to outdoor decks, from three-tiered party palaces with multiple grills, flat-screen TVs, hot tubs and waterfalls, to intimate one-level deck porches just perfect for two. But it’s the scary stuff that keeps him up at night.

McAleer is president of DeckRemodelers.com, a New Jersey-based deck design and building firm. The third generation contractor has been designing outdoor decks for more than 15 years. He says the majority of people don’t realize the dangers associated with aging and/or poorly installed decks.

“People are completely unaware of how many individuals are hurt, and even killed, in this country every year because of deck and rail failures,” McAleer says. “There is now more code concerning decks than any other single structure. People just didn’t take deck construction seriously enough in the past and it has left a large legacy of unsafe decks primed for disaster.”

McAleer says movement toward building safer decks is slow in coming partially because it’s ‘out of sight, out of mind’ for many homeowners. “Most people don’t look (critically) at their deck over its entire life cycle,” he says. “People find out I’m a deck builder and they’ll say ‘come over and look at my deck.’ So I go to these peoples’ houses to take a look, and I have to tell them: ‘Your deck is unsafe. You shouldn’t have anyone on it.’ Fact is, they never go underneath their deck to see what’s going on. They take it for granted that it’s OK.”

Mike Rudh, who designs custom deck plans for Decks.com, agrees. “Decks constructed in the ’70s and ’80s can be kind of scary. They just weren’t built to last that long,” Rudh says. “And for many homeowners, they just don’t feel it’s in their budget to fix them. Decks can be expensive, so they don’t want to spend $20,000 or $30,000 for something they don’t think might be dangerous.”

Rudh says some deck issues are easy to spot. “Genuinely speaking, you can give it the eyeball test. You can plainly see rotted wood or rusted metal.” Of course, it’s not always obvious to the homeowner. McAleer has been on calls where he won’t even risk walking on the deck. It’s a concern that goes beyond the deck builder-customer relationship.

“Do I genuinely care? Absolutely,” he says. “People might not think about it at all when they’re on the deck at someone’s house for a party. It doesn’t cross their mind that the structure they’re standing on with say, 50 other people, might not be safe. And then they’re shocked when it collapses and or/it fails.”

Both Rudh and McAleer are concerned about the number of unqualified companies in the deck industry.

“There are a lot of people out there who don’t know how to safely build a deck,” McAleer says. “Some people will think, ‘I’m a carpenter, I can build a deck’ and they’ll wing it. There are so many ways to put a deck together, and so many ways to cheat. They try to find the cheapest labor and cheapest materials they can get.”

Doing some research can go a long way toward weeding out the companies that aren’t qualified to build a deck, Rudh explains. “I recommend having two or three professional deck builders give you an estimate before hiring anyone,” he says. “Also, I would research materials online.”

An even more obvious, though often overlooked, resource is calling in a building inspector, says McAleer.

“Whether you’re a contractor or a homeowner, you should never hesitate to call in a building inspector.

If you’re working with a company and something doesn’t look right, have an inspector come out and take a look. It’s not worth taking a risk. Building inspectors are there to make sure that things are done right. Plus, they’re up on the latest code. I don’t have a problem with building inspectors pointing out shoddy work. They’re looking out for the homeowner. They’re making sure that it’s done right and no one gets hurt.”

NOT YOUR GRANDDADDY’S DECK

For those looking to build a new deck, plan on making a fairly significant financial commitment. With new materials such as capped composites and PVC, and pressure-treated lumber and tropical hardwoods, decks will last much longer, but also come with a higher price tag. 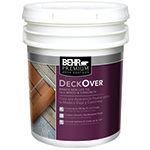 Mother Nature can be cruel, especially to our beautiful outdoor living spaces. Outdoor decks are regularly exposed to rain and snow, wind and sun. These elements take their toll on both natural-wood and composite decks, and without protection, can shorten the life of a deck.

However, many professionals are turning to innovative coating products such as DeckOver® wood & concrete coating to protect and breathe new life into their outdoor living spaces.

This is a solid-color, 100% acrylic resin coating that can be used on both composite and natural wood decks, railings and stairs, as well as on concrete pool decking, patios and sidewalks. The coating seals and protects older, weathered decks, and helps resist cracking and peeling.

“Since 1999, there have been more than 850 reported injuries and 20 deaths as a result of deck failures.”

“More than two million decks are built and replaced each year in North America. And of the 45 million existing decks, only 40% are completely safe.”