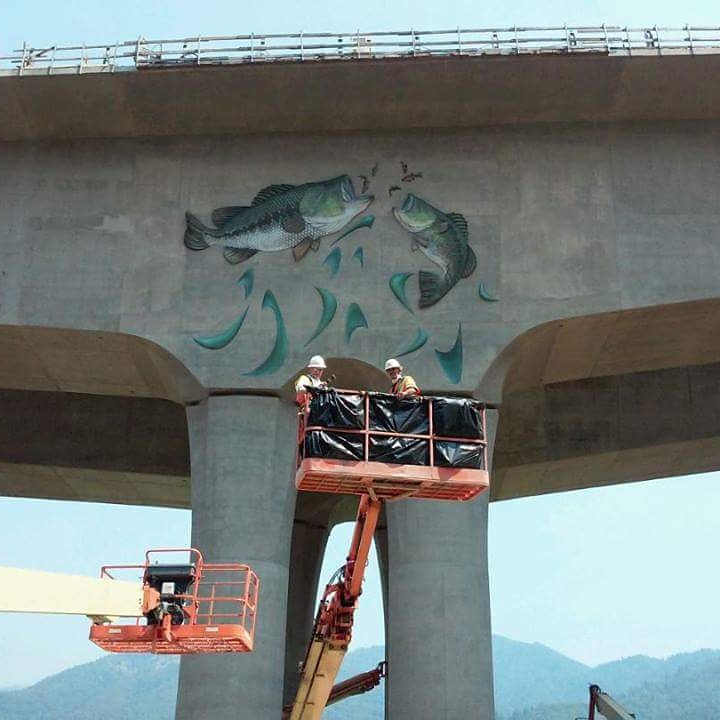 Jim Currie was on his way to bid a job near Lake Shasta, CA when a bridge construction project caught his eye. Says the owner of Currie’s Quality Painting in Redding, CA, “It was just coincidence that I was passing by the Antlers Bridge project when I did. I could see it was going to need some concrete coating, something I knew I could do, so I stopped by and introduced myself. Turns out they were literally just talking about who they were going to get to do the job—and there I was.”

Currie made several trips to the site before building a bid for four 80′ x 80′ panels featuring two large bass and a number of bait fish in raised relief. The project also included two abutments, which had been poured in a faux-stone form. “While I was comfortable with the amount of artistry I could bring to the stone, I knew I needed help with the fish,” says Currie.

Currie stopped by a local paint shop to see who they might recommend for the job. He recalls, “One name kept popping up: Jerry Stuart. I decided I’d hit up the other paint store for ideas before making any calls. I pulled into their lot, and whose truck was sitting there but Jerry Stuart’s.”

A licensed paint contractor specializing in murals and decorative interiors, Stuart was intrigued by the job and, in short order, the two pros were awarded the job.

The pair spent four weeks in each other’s company in a lift hovering 200′ above the Sacramento River. Each fish panel required a full week’s worth of painting and roughly 12 gallons of NewLook’s SmartColor Concrete Color Stain, which was applied in 9 coats in 13 different colors. “NewLook offered the colors we needed plus it checked the box for biodegradability that the project required,” says Currie. The panels were then sealed using three coats of NewLook SmartSeal WB, which complied with all the stated environmental regulations.

The company that constructed the bridge, Tutor-Saliba, did all the prep work weeks before we began, and left us with a perfect color palette to work from. Currie then spent another three weeks focused on the abutments, which were painted to look like river rocks. Spanning 3,500 square feet, they were initially sprayed with 11 gallons of the same product in sand-colored base coat. The individual ‘stones’ and ‘grout’ were then sprayed and back-brushed with another 10 gallons of stain in a variety of colors. Like the panels, the abutments were finished with 3 coats of NewLook’s SmartSeal WB.

“By far,” says Currie, “this was the most enjoyable job I’ve ever done. There were a lot of moving parts, as bridge construction was still going on while we were working but the view—and the company—couldn’t be beat.”

For more articles on how pros are landing projects, visit inpaintmag.com 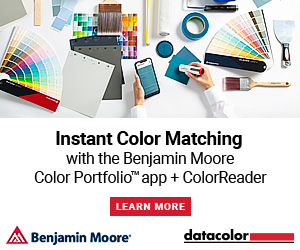