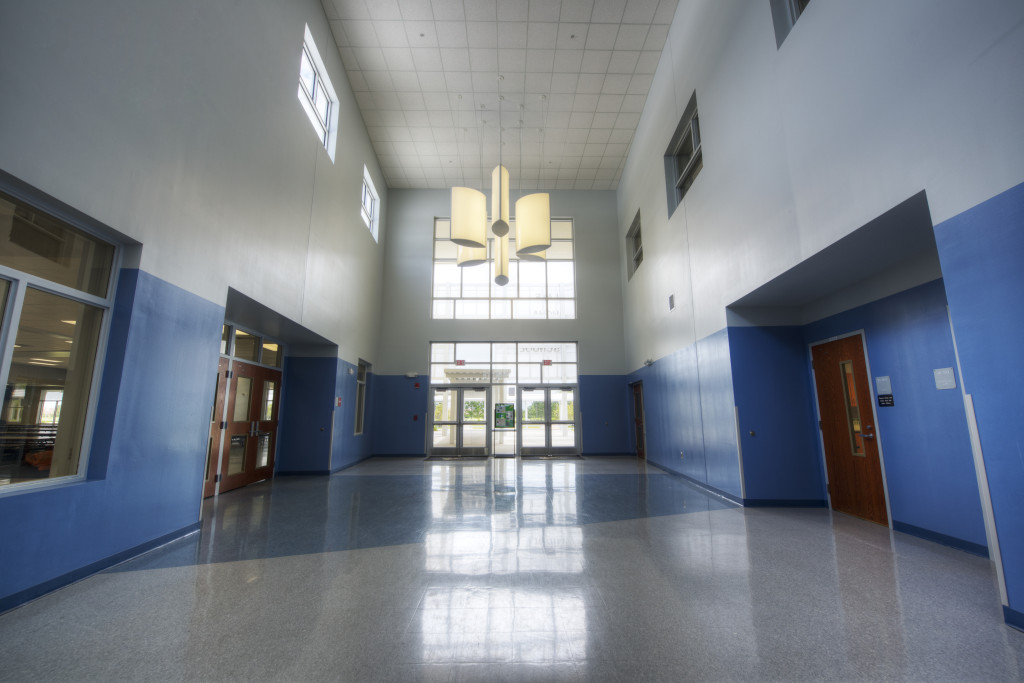 About one-third of Bob Connor’s multi-million-dollar book of business comes from work on educational institutions— everything from elementary schools on up to colleges and universities. It’s a sector he began pursuing about 15 years ago by getting to know various facilities managers and school officials at a wide range of enterprises.

The president of Indianapolis-based Connor Fine Painting often gains business through referrals and long-time relationships. When it comes to education work, facilities managers that he has known for some time now see Connor as a go-to guy for quick-turn work that keeps their campuses and buildings looking polished.

“The administration, students and parents are all potential headaches for a facilities guy. If you can keep a facilities person out of trouble, the more valuable you are to them,” he said.

Connor, however, understands his limits when it comes to seeking out education jobs. He avoids bidding on new-school construction, a wildly different—although potentially quite profitable—animal that requires unique bidding strategies, heavy documentation, and its own way of scrutinizing production rates and schedules.

“There’s a whole art to trying to make money with those kinds of contracts,” Connor admits. “There are a lot of tricks to maintaining margins on big jobs like that. … When you have a business that’s built on longstanding relationships like ours, that doesn’t always translate well into new construction.”

For Connor to get into the repaint side of education work, it’s not unlike building a business relationship with a customer in other commercial sectors. He happily takes on the small jobs with the hope of them bringing bigger, more profitable, projects later.

That’s the approach he’s taken for the past 15 years with Butler University, a private institute with about 5,000 students. Even today, some Butler jobs, like ones that involve covering up water damage in a small wall section—or others that may simply require updating paint on a single wall in a room—only require a few man-hours. But showing that he can be counted on for the seemingly petty work has also built loyalty between customer and contractor, and each year, Connor sees large summertime repaint projects as well. In any given year, Butler brings in about 100 work orders for Connor Fine Painting. The company has similar relationships with other private-school corporations with multiple campuses in the Indianapolis area as well.

“We might be in a dorm room and only paint one wall. … but then we get the summer painting, too,” he said. “This has developed over time to where I know there’s enough money in it to do it; yet it allows them to manage their costs too. Some might say a $325 job is a pain in the butt, but we look at it as part of a $300,000 account.”

Education facilities inherently bring their own scheduling challenges. Holiday breaks, spring break and summer break, times when many people are planning vacations, are higher-volume time windows for paint pros on educational campuses, since there is far less foot traffic in buildings. This type of scheduling also brings a downside.

“Most of our guys are tied up in schools and are not going to be doing a lot of other stuff in June and July or before August 15,” Connor noted.

Scott Kuperman, owner of Paint Platoon USA, a Cary, IL-based painting contractor, also says jobs in the education arena require a keen eye for dry times and odors. He’ll often order low-odor or low-VOC products for education jobs, but likes to stay mindful of dry times, especially if he knows children may be back in a room or space within a few hours.

“You want employees who are familiar with safety and how to keep everyone else safe, and who can be conscience of the fact that there are kids coming here every day,” he said. “Lead-based paint, for buildings built before 1978, is another concern. You have to be really careful about proper containment.”

In Illinois, painters are still allowed to use some industrial urethane enamels and solvent-based products if odors aren’t a problem. If the situation is right, McCahill will use these paints on trim and railings. Above all, he says it’s important to indicate on MSDS forms the type of paint being used and to have a discussion with school officials about potential odors before the job starts.

“I’m still from the school of solvent-based paints, although they are coming up with good crossovers,” he added. Connor looks to zero-VOC paints as much as possible. “If we can use water-based epoxy, we will use that on the walls. We do use a good amount of single-component, pre-catalyzed epoxy on walls and ceilings, too,” he noted.

McCahill is also seeing more use of unique products like Sherwin-Williams’ Dry Erase Coating and similar multicomponent formulations that serve as a dry-erase board after drying. Other products—like Rust-Oleum’s Magnetic Primer, which creates an actual magnetic surface after application—are also popular in schools. “Those are some of the creative things you’re seeing in these environments,” he added.

McCahill has also carved out a small niche in school repaints by focusing on preserving acoustical ceilings and their grid systems. He favors ProCoustic from ProCoat for these types of jobs, but also knows how to effectively fix old ceiling tiles.

“If you want a classroom to look brand new, then overlooking the ceiling can be a bad move,” he said. “Priming, painting and fixing the grid system and tiles is more work, but it still makes a huge difference. These coatings allow the ceiling to retain its fire rating and acoustical values, too.”

Paul Dunkman, president of Orlando-based Dunkman Paint and Wallcovering, LLC, focuses on new-education-facility construction. He also takes on his share of new-construction health care, public works and multifamily jobs as well. New-commercial construction work requires plenty of due diligence before ever submitting that first bid, he advises.

These projects, whether they are in education or any other sector, require much more cost analysis than a typical residential bid, and job sequencing is a big factor when measuring production rates.

For example, for a new school, a contractor must know which trades will be in the work area on the day the primer coat is applied.

“There are a multitude of variables the residential painter would have no idea about, and they just might apply a cost analysis by square footage of the building. You really have to understand how the work is performed and in what sequence, to accurately price and get into the market,” he explained.

Dunkman’s father started the family painting business almost 20 years ago, after spending years working for a paint manufacturer. That experience helped him understand the materials side of a new-construction bid, but labor costs became a trial- and error-experience for both he and his son.

“To be honest, I really didn’t figure it out until after I was in the business for about eight years,” Dunkman admitted.

Part of that learning process involved becoming more familiar with PDCA estimating guidelines and standards. But PDCA’s commercial forum, which includes a host of experienced commercial contractors who are willing to share insights from their experience, was the real game changer for Dunkman.

“It was instrumental in the growth of our business,” he said. “After eight years of struggling, I made three contacts from different areas of the country during one forum. After three or four 15-minute conversations, I had a clear idea of what I needed to do differently going forward.”

Being properly capitalized is another critical element to succeeding in new-school construction, he added. Payment time lines can become extended very easily in new-construction scenarios. For example, his team completed a nearly $300,000, six-week job and full payment wasn’t received for another four months.

Dunkman recommends having at least four months of working capital to pay overhead like labor, equipment and materials before submitting a new-school construction bid.

Dunkman has also seen his share of legal disputes. Expect them, he said, if you plan to pursue school construction. Seek legal help for any area of a bidding contract that doesn’t make sense, the pro adds.

“This is all about contract terminology and manipulation. The GC can use the contract to put you in default for work not properly executed if they deem that necessary, and they can try to exhaust your working capital with litigation strategies,” he added.

For Kuperman, his biggest sticking point with new-construction work comes with how paint specs are written.

“You’ll see stuff where it says to apply a coating to the SP6 standard. Then later on the page it’ll say SP3,” he cautioned. “That is a problem. Nobody really notices it until the time comes when the painter says he’s done and it doesn’t look good and he can’t get paid. With repaint work, we’re not at the whim of some poorly written specs. We’re the guys that write the specs and make the recommendations.”

Those new to working with municipalities or public agencies like school districts may also be faced with a bidding scenario that requires paying what is referred to as a ‘prevailing wage.’

The Davis-Bacon Act of 1931 is a federal law that stipulates a prevailing wage, or common wage for the area, be paid on public projects. States and municipalities have interpreted the act in different ways. Some have added minimum bid requirements and others require the prevailing wage to be those established by a local union entity. In these states, you can expect new-school construction bids will specify using union labor.

These situations can bring considerable added administrative costs, too, McCahill said. He notes that if a painting contractor has no history of working with a union, there can be some expensive lessons as a result of audits, and the need to maintain specific bookkeeping practices for these jobs.

“That’s why we choose not to do prevailing-wage work most of the time,” McCahill noted.

While some see an allure to expanding into education, most pros agree that starting with small repaint work to test the waters is a safer approach. Then larger—hopefully more profitable—jobs may come.

“That’s the way a lot of guys do it,” Kuperman added.

Then you’ll likely need to tap some old-school wisdom before setting sights on that first new-school construction project.