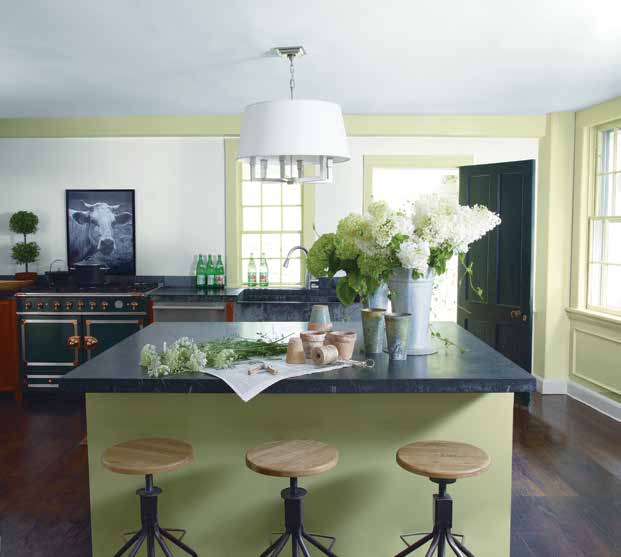 They might not have to contend with the elements, but interiors have to stand up to a variety of factors—kitchen smoke, dirty fingers, and furniture scrapes to name a few. Painters and their customers want an interior paint that covers past marks and offers scrubbability to make it easier to keep clean in the future—and look great too.

For repaints in Santa Fe, NM, Mike Freeman is on the case. Managing both residential and commercial jobs, the owner of the Albuquerque-based Mike’s Quality Painting, Inc. turns to Sherwin-Williams as his primary interior paint supplier.

He often relies on their ProMar 200 Zero VOC Interior Latex. “The ProMar 200 touches up really well over a long period of time,” he says. “I’ve even had clients where we’ve done a portion of the house, then a year later returned to do other rooms … sometimes we’ll touch up the previously painted areas, and those touch-ups look great. For the price and what you get out of the coating, it’s a consistently great product and value.”

For eight years, Chad Jeffries has owned Brick City Painting & Drywall in Mexico, MO, tackling mostly commercial jobs with some residential and light industrial work in the mix. For about 80% of his commercial jobs, he uses Sherwin-Williams ProMar 200 Zero VOC Interior Latex. (It’s also his recommendation for residential new construction.) “It’s our big workhorse,” he says. “It’s got great hide, covers well and touches up great, which is huge for us. Plus, the pricing is where it needs to be.”

For ceilings, he likes Sherwin-Williams Pro Industrial Waterborne Acrylic Dryfall, and for doorframes, other trim and metal beams, he likes the company’s Pro Industrial Waterborne Catalyzed Epoxy. “The epoxy is a one-component product, so there’s no mixing for my guys, and it’s priced very well,” Jeffries says. “And even with the semi-gloss sheen, it still touches up well. We’ll even use it on walls in high-abuse areas for the harder shell.”

Undertaking both residential and commercial work, this CertaPro Painters of the Main Line serves Philadelphia and its surrounding suburbs.

“The two interior topcoats I use most often are Cashmere and Harmony,” he says. “We believe you get more for what you’re paying for with them.”

The Cashmere Interior Acrylic Latex, he notes, gives a smooth, buttery finish, which customers appreciate, and his crews like that it’s easy to apply. And he often recommends the Harmony Interior Acrylic Latex for families with young kids and pets. In addition to the durable finish, he says, Harmony has properties that help promote better air quality and reduce odors. In wet areas, they might mix in additives for mold prevention, and they might go with a satin finish (vs. an eggshell for other areas).

For trim, Williams leans on Sherwin-Williams Emerald Urethane Trim Enamel. “It will cover in one coat,” he says. “And it’s a glossier finish, making it easy to clean.”

Paintworx, Inc. has done residential and commercial interior and exterior repaints throughout the Seattle area since 2012, when Joshua Voigt started the company.

For commercial customers price is a key factor, so his pick for walls and ceilings is Evolution Interior from Miller Paint. “That might be surprising because it’s their premium,” he says. “But we did a blind test and, for a one-coat application, it outperformed anything in its price range. I would use it more on residential projects, too, but it’s a lesser-known brand, which some customers aren’t comfortable with.”

For residential repaints, he likes Sherwin-Williams Cashmere Interior Acrylic Latex, which he loves the look of, and Benjamin Moore Regal Select Interior Paint, which is a durable, highly washable acrylic resin product that is zero VOC.

Fred Hamilton Contracting Inc., which serves the Albany, NY area, has different needs and expectations of interior coatings than other contractors for their apartment repaints and occasional commercial work.

Jay Emery, a VP for the company, likes Benjamin Moore Ultra Spec 500 in eggshell for walls. The price point is key for the types of jobs he manages, where residents tend to turn over frequently. “It’s a higher-end contractor-grade paint,” he says, “but it’s still relatively inexpensive compared with homeowner-grade paints.” He says the coverage is solid and the odor is pleasant, which is a plus when painting occupied residences. “Some paints stink,” he says. “Call me crazy, but I think this one has a sweet smell.”

For doors and trim, Emery likes PPG Paints Manor Hall Interior Latex in semi-gloss. “It gives really great coverage,” he says. “We see a lot of beat-up white doors with scuff marks, crayon, marker, etc. And I have not found any other paint that can cover these doors better in one coat than that.”

He says he gets a good deal on the PPG, even though he acknowledges that he might be spending a few more dollars per gallon than he would on another paint. “But that extra expense saves three to four hours’ worth of labor,” he explains.

Owner Kevin Wooten’s go-to for walls is Sherwin-Williams Harmony Interior Acrylic Latex. “I like it because it touches up really well and covers really well too,” he says. “It’s also low odor and zero VOC.”

As part of his services, he offers lifetime annual touch-ups. “So I want something that will touch up year after year, and the Harmony does,” he says.

For kitchens and other wet areas, he leans toward the company’s Cashmere Interior Acrylic Latex because its super-smooth finish makes it easier to clean.

When it’s time to paint ceilings, Kevin opts for the Sherwin-Williams ProMar 400 Zero VOC Interior Latex (flat). “I can touch up ceilings I did 15 years ago, and it still looks great.” He also appreciates that it’s a true flat paint with zero sheen.

And for trim, he likes Benjamin Moore Aura Interior Paint (semi-gloss), which offers a rich, beautiful finish. “It’s one of the most expensive paints I buy, but it’s worth it,” he says.