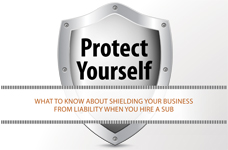 Given the nature and seasonality of the paint business, it’s a given that from time to time you’ll need to bring on other crews to help complete big jobs. Whether it’s a team of two or 20, extra hands are great for raising productivity. However, without the right contract and proper insurance in place, they also have the potential to raise your liability.

Assuming you know who you want to hire, the most important steps are drawing up a contract and making sure your sub is adequately insured, say attorneys who specialize in construction litigation and insurance coverage analysis and litigation. “Often, the initial contract begins with an American Institute of Architects (AIA) Standard Form of Agreement,” said Peter Balouskas, an attorney with Burke, Scolamiero, Mortati & Hurd, LLP in Albany, NY.

“A standard contract should explain that the sub is an independent contractor and should specify what control the hiring contractor has and does not have,” said Andy Rowlett, an attorney with Howell & Fisher PLLC, in Nashville, TN. Rowlett explained that the general contractor is still protected from liability if he or she stops work or inspects the progress of the work, receives reports from the sub and makes recommendations, “that don’t have to be followed by the sub. If you want to avoid liability for a sub’s work, make sure you allow the sub to use his own methods and equipment to complete the job.” Once a hiring contractor specifies how a job should be done, Rowlett said, exposure to liability may be an issue.

To guard against such exposure, said Kevin Burke, attorney and managing partner for Burke, Scolamiero, Mortati & Hurd, LLP, the contract also must have indemnification language within it that essentially says to the hiring contractor, “I defend, hold harmless and indemnify the hiring contractor to the fullest extent permitted by law for any and all losses arising out of or resulting from the performance of the work under the subcontract.” Burke explained that this is called ‘contractual risk transfer’ and is critical for a general contractor’s protection from being named in a lawsuit connected to the sub’s performance. Legally, Balouskas said, both the contractor and subcontractor may limit or accept risk transfer between themselves in a contract. But typically, as a matter of law, said Balouskas, to protect the contractor, the contract obligates the subcontractor to accept risk transfer from the contractor.

He adds that the contract should state that the sub’s commercial general liability insurance will name the hiring contractor as an ‘additional insured’ on the sub’s policy.

FOR A HIRING CONTRACTOR’S PROTECTION, CONTROL MUST BE RELINQUISHED

Contractual risk transfer goes hand in hand with what is informally known as the Internal Revenue Service’s ‘retained control rule.’ The IRS asks a number of questions on its Form SS-8 to determine if a worker is truly an independent contractor or an actual employee of the hiring contractor in the eyes of the IRS. “The IRS says there are limits to how the scope of work is expressed in a contract,” Burke said. “The hiring contractor cannot dictate the type of equipment, supplies, or the methods used (crew members hired, hours worked, etc.) to complete the job, for example.”

When in doubt, Burke suggested, don’t over-specify how a sub’s work should be completed; limit yourself to describing the scope of work in a contract. “The IRS says every employer has to be aware of the importance of not characterizing workers as independent contractors when they’re functioning more like employees,” Rowlett said.

“As much as possible,” he advised, “avoid micromanaging a subcontractor, so he cannot be considered an employee under any circumstances.” For a hiring contractor’s protection, Rowlett added, specifying in the contract that the subcontractor has control over how the job is completed should be accompanied by the hiring contractor giving up actual exercise of control.

INSURANCE IS THE RESPONSIBILITY OF THE SUB

Control issues and potential liability are separate from insurance, but the insurance a subcontractor carries is just as important as abiding by IRS expectations for a hiring contractor/independent contractor relationship, Rowlett said. “Make sure your sub has appropriate and adequate insurance,” he said. It is the responsibility of all subcontractors to carry insurance, Balouskas added.

Secondly, adequate insurance coverage will include workers’ compensation insurance for the sub and all of the sub’s employees, Balouskas said.

Be aware that the smaller a subcontractor’s business is, Rowlett said, “the likelier it will be that the sub won’t carry additional insurance to protect a hiring contractor.”

“The limits of the insurance for an additional insured typically are equal to the painter we insure,” explained Johnson. “And there’s not a lot of difference in premium between a $250,000 policy and a $1 million policy,” Johnson said. In addition, he said, there’s only a small charge—usually $35 to $50 per addition—to name a hiring contractor as an additional insured. If a subcontractor requires, say, 10 or more different additional insureds to be named in a policy, Johnson’s agency will charge a blanket fee of about $200.

DOCUMENTATION TO REQUEST WHEN HIRING A SUB

In addition to a signed contract, a hiring contractor should require a certificate of insurance, Rowlett and Burke said, when you hire a subcontractor.