The Big Push Toward Small Gains Traction in the Apartment Market 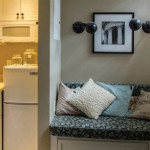 Sometimes called apodments, metrosuites, or micro-apartments, tiny living quarters are popping up in major metro areas across the country. Ranging from 150 to 300 square feet, micro-apartments are fast becoming the go-to solution for individuals who want to work and play in urban areas but can’t afford the typical price tag attached to urban living.

While only about the size of a single-car garage, micro-apartments tend to be tricked out in a much nicer fashion. A full bath, kitchen, and Internet access are all standard features in most micros; many come furnished with built-in loft-style beds, foldout tables and other furnishings.

THE RIGHT-SIZED SOLUTION FOR URBAN RENTERS

According to census data, the share of households occupied by a single person reached 27% in 2010. In some cities, including Atlanta, Denver, Pittsburgh, Seattle and Washington, that number exceeds 40%. Micro-apartments are a way for developers to meet the high demand for space while keeping the cost low to potential renters.

Robin Dionne, director of outreach and client relations for The Arcade Providence, Providence, Rhode Island, states, “Our resident base is a mix.” Comprised of 48 rental units situated above retail space, the Arcade reached full occupancy (and amassed a lengthy waiting list) well before construction was completed and, more impressively, before a single bit of promotion was done.

“Word just trickled out and soon we were besieged with rental queries from transient professionals, students, you name it,” says Dionne. Drawn to the building’s landmark location in the heart of the city, tenants also found appeal in the units’ unique style and architecture.

“Some units have walls where the building’s original slate and mortar are exposed. Others have quirky angles and skylights,” says Dionne. “And every unit opens onto an impressive atrium, which is filled with natural light that spills into each apartment.”

Appealing as all that is, there’s no doubt that the Arcade’s affordable rent (starting as low as $550 per month for some units) as well as the walking-distance access to downtown nightlife also hold great appeal.

“Our tenants are an out-and-about crowd; not really a homebody crowd,” says Dionne.

But for many micro-apartment renters, a city-center location is about more than access to nightlife.

“Nobody else is producing something in this moderate price range,” he said. “You get a brand-new building with a new bathroom. You get Internet access, and it’s fully furnished. In general, our buildings are on major bus and/or light-rail lines.”

The other segment micros fit the bill for are seniors, and young people just getting started. Often on limited incomes and without vehicles, micros provide each group with an affordable and manageable place to live, as well as access to retail, services, and public transportation.

While developers and potential tenants are eager to see the micro boom continue, not everyone is sold on the concept.

Reasonable Density Seattle, a community activist group, has raised a few concerns on the current development going on in the city.

Spokesperson Bill Bradburd says, “The problem is that developers are using a loophole in current building codes to put up 40–50-unit structures in what are considered lower-density zones. Our concerns aren’t limited to the effect an essentially transient population has on an area … we’re also concerned about the fact the loopholes are allowing for the creation of unsafe conditions for tenants. Parking, as well, is another concern related to quality of life and the health of the community. The lack of adequate parking is a problem for residents and local businesses whose customers can’t park near them.”

On the other hand, developer Patrick Kennedy of Panoramic Interests in Berkeley, California believes the benefits of the two micro-constructions they’re currently building in San Francisco (one with no parking but ample bike storage) will outweigh any potential downside.

“You can have a lot of people in a space, but the impacts are all on the plus side of a ledger: you don’t have any traffic, you just have people taking transit, riding bikes or walking, and spending money in a new neighborhood,” says Kennedy.

He further cites the benefit of an expanded tax base at a time when public budgets are getting pinched. He says micros are, “a way of civilizing an area without using city, state or federal funds.”