The Tower at PNC Plaza 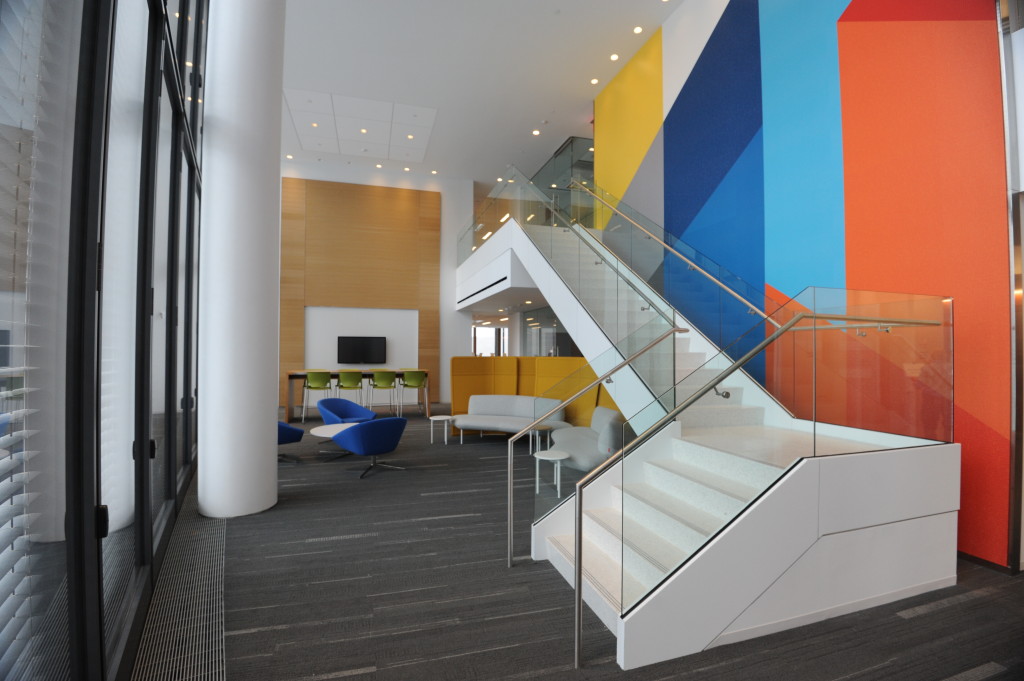 When it opened on October 1, 2015, The Tower at PNC Plaza added more than an interesting landmark to the Pittsburgh skyline; it demonstrated how green technology could effectively be incorporated into commercial design without compromising aesthetics.

Home to the commercial office headquarters for PNC Financial Services Group, the $400- million, 33-story tower incorporated a number of unprecedented technologies, helping the building to achieve LEED Platinum status and the title of the greenest office building in the world. 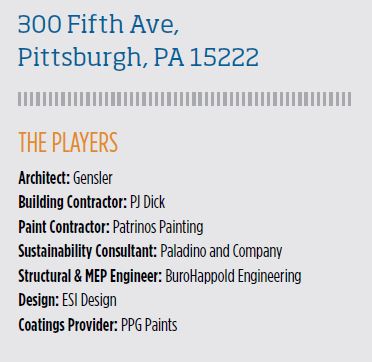 INNOVATION FROM THE INSIDE OUT

Purported to be 50% more energy efficient than similar buildings, The Tower integrates both passive and active design strategies and systems.

From the double-skin facade designed to help the building naturally ventilate, and a water recycling system that collects and reuses rain water, to a smart chandelier that monitors and reports energy usage, and windows that actually open (even on upper floors), every element of the 800,000-grosssquare-foot building’s design was selected for its potential environmental impact.

According to Dan Passinault, associate director, innovation, products and commercialization at PPG Paints, “From the beginning, the building owners indicated they wanted to achieve LEED Platinum status, which means from furnishings to coatings, every component has to meet certain standards.”

In the case of coatings, paint contractor Patrinos Painting had a long history working with PPG and was well aware they had the products that would meet and, in several cases, exceed the required LEED 2009 standard.

Rick Schademan, field superintendent for Patrinos said, “The goal of the project was to build the greenest building in the world and PPG not only had the product, they had the ability to deliver it as it was needed.”

According to Schademan, painting the high-rise in the center of Pittsburgh was no small feat. “We had two shifts going at most times with up to 25 guys working at a time.” Schademan estimates they used somewhere between 6,000 and 7,000 gallons of coatings over the course of the nearly three-year- long project. “From the first job of painting the water-recycling tanks to the final spraying of 34 stairwells, it was a massive job. But in the end, we got it done according to plan and schedule. It’s really an impressive accomplishment for everyone involved.”

Rich Finoli, business development manager at PPG Paints was intimately involved with the project. “When you’re working on a project of this magnitude, there are a lot of moving parts and people to keep track of,” he says. “We had to stay on top of where everyone was and when product was needed … and where. Some days, we made two or three deliveries to the job site. We tracked inventory to make sure we always had what was needed on hand. As with any project,” he says, “time is money. We respected that and did our best to anticipate needs so that paint was never the cause of a delay.”