To Bid or Not to Bid 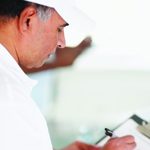 Bruce Watson, owner of Jalapeno Paint Werx in Naperville, Illinois has seen his share of good and bad bidding situations. He has come across the ultimate something for- nothing type, the perfectionist, and everything in between. Years of experience have taught him one thing: “Sometimes, in certain circumstances, it’s best to say ‘I might not be your guy,’” he explains.

Watson also understands the most important element in the bidding process is clear communication with a prospect—even if it means being clear about things he or she doesn’t want to hear. Watson and a few other estimating professionals recently shared some tips from the trenches on how they bring in accurate numbers, feel good about the work they get and, even better, feel confident about the work they turn away.

In today’s market, leads come from a variety of channels, many through the Internet. Painters can jump into bidding wars on Thumbtack, receive calls from Google AdWords, Angie’s List referrals, and numerous other sources. Watson asks his office staff about the referral source before he reaches out by phone to a prospect.

“When you know where it came from, that gives you a little idea of what to expect,” he said.

Lynn Fife, owner of Evergreen Technology, has been in the business for more than three decades. He says that initial phone conversation is key to whether or not you proceed with the bid. And so much can be gleaned in only a few minutes. One of Fife’s first questions is whether the person has ever worked with a professional painter before.

“If not, that tells me a lot. Most of them think painting is not that expensive,” he said. “If someone is just looking for the lowest bidder, I recommend calling the low-bid painter in the area—we all know some of them around town. I tell the low-bid painter, ‘I have a lead for you; add $100 on top of it for me.’ Say ‘thank you’ and move on.”

After weeding out those with unrealistic expectations, there are still plenty of questions to ask. When on-site, Peter Buttenwieser, managing partner of a CertaPro Painters franchise in Westchester, New York, looks for inconsistencies in a job.

“You look at Room A and it’s immaculate, but room B has water damage. You need to communicate what you can and can’t do in that situation,” he said.

In commercial bids, Fife said it’s common to come across missing job specs or areas that require clarification. In those situations, a request for information, or RFI, is submitted to the general contractor before the bid is completed. In commercial jobs, a bid should be open for two weeks, and most allow for RFIs to be submitted up to one week before the bid is due.

“If somebody wants a bid in two days, that’s a huge red flag,” Fife added.

Bill Walloch, an estimator with Brad Stoner Painting in San Diego, California, is always on the lookout for situations where scaffolding or special rental equipment might be needed. These are things that can delay a job, but also compromise the safety of some crews.

Walloch says, “I always say, we only paint so high. You don’t really want to take a job that’s out of your scope. Someone’s going to get hurt.”

While gathering information, it’s also good to think about pricing options too, Fife adds. Some customers may be selling a home soon, for example, and are looking for a short-term solution. Adjusting pricing on materials and/or prep and explaining it clearly can help a customer feel like they have options.

“You want to educate them and let them choose,” added Fife.

Fife also recommends bidders have a very clear understanding of their production rates. Studying past jobs is essential.

“You have to get away from the gut-feeling approach,” he said. “About 80% of painters go out of business in the first five years because of that.”

Fife said it’s important to keep track of the time it takes for crews to complete prep and paint processes on jobs with varying levels of difficulty. Studying this time over the course of several months is also important. He recommends having three types of production rates: fast, medium and slow (the latter for more complicated work).

“The biggest money loser in bidding is surface prep,” he said. “But you don’t have to take the ‘win some, lose some’ approach.” Fife also clearly defines the scope of the prep work being done in his contracts. He defines prep levels according to the Painting and Decorating Contractors of America (PDCA) prep level guidelines, a one-to-four rating system, four being the highest-quality level.

A bid should be far more than numbers on a page, adds Fife. Detailed documents highlighting the scope of work is critical. Customers need to understand the level of work they are and aren’t getting. In short, the more that’s in writing, the fewer surprises for both parties down the road.

Too often in commercial work Fife sees low-bidding painters who do not give specifics on the number of coats. The goal is usually to get the job, then add change orders down the road. The painter may get the job, but it’s really a one-and-done approach to business.

The estimating professional also writes ‘as per PDCA industry standards’ on all his bids. The standards protect the painter against certain liabilities that can come with a job, particularly involving repaint or touch-up scenarios.

There are also many estimating software programs on the market today. Fife uses a program called PlanSwift,® while Buttenwieser uses a proprietary model designed by CertaPro.

What separates one bidding software from another is flexibility. Programs should allow you to adjust production and labor rates easily, and allow for users to input plenty of details specific to a job.

“Our program is constantly evolving as we learn new things and take on new work,” adds Buttenwieser. “It provides good guidelines, but it’s not exact. … It really helps us build an estimate based on the individual elements of a job.”

DON’T BE AFRAID TO WALK

While no one likes to turn away business, there are times when it’s more trouble—and money—than it’s worth. Pay attention to the signs, be firm and confident with your numbers, and give yourself permission to take a pass when things aren’t coming together in a manner that doesn’t look to leave you feeling good about the work you do or the money you earn in the process.