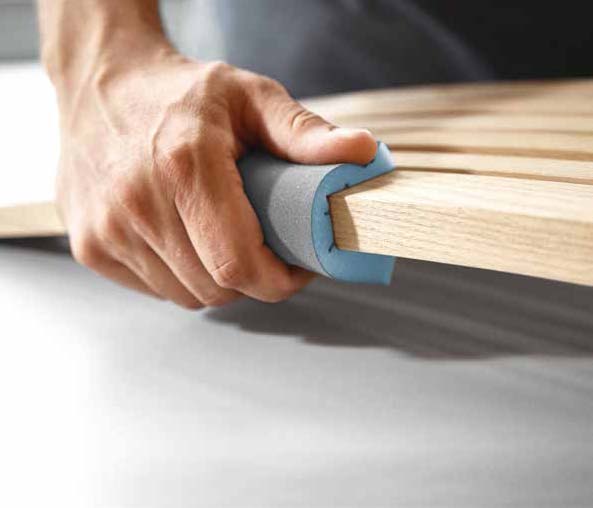 It’s the image of that frustrated pro that makes John Petersen’s job so unique—and fun. It’s not that he enjoys watching a pro struggle, but 3M’s advanced specialist of product development likes to take that struggle and use it to make products better, ultimately leading to abrasives that make work easier and improve results.

“That’s essentially how we develop products. … You see that frustrated painter throw away a piece of sandpaper and you think ‘maybe we’ve got something for that?’ We spend a lot of time out in the field trying to identify their pain points … sometimes pros may not even know they have them … then we develop workarounds,” Petersen said.

He and others who develop advanced abrasives say there’s a lot of science behind the sandpaper any pro holds in their hand or slaps onto the end of a sander these days.

“Back in the day, sandpaper was just rocks on paper,” he added. “We continue to push the envelope of what is a very old category.”

A HISTORY OF IMPROVEMENT

Some researchers argue that sandpaper is a centuries-old category, having traced its origins as far back as 13th-century China, where it was made predominantly from crushed shells.

Since then, there have been varied accounts of sandpaper’s early use in London, Paris and areas of Europe in the 1700s, until in 1834 when—according to the Directory of American Tool and Machinery Patents—a patent for mass manufacturing of sandpaper was filed by Isaac Fisher, Jr. of Vermont. In the early 1900s, 3M developed a sandpaper specifically for automobile repaints. After that, the company went on to create abrasives for many other applications. Contrary to any silly lore you may hear, sand is not an ingredient in sandpaper.

For Petersen, today’s abrasives are still an evolving technology but, fortunately, now an idea sparked by a job-site frustration can be almost immediately addressed. He is able to assemble a team of product-development specialists, engineers, and other technical minds rather quickly.

“Within a few days, we can get a half-dozen people into a room. Few companies in the world can pull together technical resources like 3M can,” he added.

One unique improvement came from Petersen noticing paint pros constantly folding sandpaper in half when using it. The sheet would quickly become creased, worn and unusable.

The reason, he discovered, is that the untreated sandpaper backing is rather slippery when folded onto itself, causing the sheet to slip while sanding—slowing down the work, tiring the user, and even hurting the hands at times.

The solution came in the form of 3M’s Advanced Abrasives with ‘No-Slip Grip’ backing. This premium product line has a coating on the back that eliminates slippage and allows a pro to easily use their entire hand when sanding.

“You can use your bigger arm muscles instead of stressing the smaller muscles in the hand, and you can use more of the sheet. You can be more productive with less fatigue,” Petersen added.

Abrasives have needed to keep pace with the industry’s shift from oil-based paints to water-based formulations and low-VOC offerings. Removing an oil-based coating tends to clog up the abrasive surface quicker and wear it down faster, said Johannes Frick, head of business development for Festool.

With the shift from oil- to water-based paints, Petersen has noticed a movement toward finer-grade preferences. Many pros seem to be asking for grits 220 or finer, which was not the case in the past.

“There’s very little need for coarse grades unless you’re doing a refinish job where a coating needs to be completely stripped off,” he added.

Aluminum oxide is the primary ingredient in abrasives for commercial and residential painting applications. Petersen emphasizes, however, that aluminum oxide has made quality strides through the years. Many lower-grade products will use a brown aluminum oxide with a square, blocky shape to the abrasive mineral upon close inspection. Premium aluminum oxide has a more angular shape and is much harder than traditional aluminum oxides.

“They’re heat-treated and sharper out of the gate,” Petersen said of the premium-quality aluminum oxide. Along with aluminum oxide advances, manufacturers continue to tinker with better ceramic/aluminum oxide combinations in products. Festool’s ceramic-grain-coated Granat sheets for sanders are popular among painting professionals for their longevity.

“You can be more efficient and have less down time. What took two or three discs [on an orbital sander] in the past, you can now do in one,” Frick said.

Ceramics aren’t new to the field. 3M developed its first ceramic about 25 years ago with its Cubitron brand, then started incorporating ceramics into other lines. Other manufacturers like Mirka with its Abranet line, and Klingspor’s newer CS610 and CS612, offer longer-lasting ceramic grains for pros, and DIY markets as well.

Christopher Spreadbury, U.S./Canada market manager for Norton/Saint-Gobain Abrasives, which markets Norton-brand abrasives, says longevity, from the standpoint of the actual abrasive itself, is one part of the conversation he often has with pros—but many are also trying to reduce dust as well. Heavy dust is one of the most talked-about factors among pros for how it can cake and ruin abrasives and also compromise job quality—not to mention create a mess for owners.

Norton designed its ProSand Multi-Air Cyclonic Sanding Discs with dust mitigation in mind. The product features holes in a spiral pattern across the abrasive’s surface, which creates an upward force, like a cyclone, to effectively extract dust. Users don’t need to worry about aligning holes like on traditional discs for orbital sanders; just slap them on and go. Because small holes are distributed across the entire face of the abrasive surface, dust extracts evenly and does not clump in trouble spots, like the center or the edges of the disc.

The abrasive also includes ceramics that, for a time, re-sharpen themselves with use, allowing for 20% to 30% greater longevity, according to Spreadbury.

“For us, it’s important to get the dust out really fast,” Frick added. “By doing that, the user is spending less time sanding his own dust and more time sanding the paint they want to remove. A good [dust-reduction] system can reduce time—and reduce disruption of a customer’s routine and life.”

Considerable attention has been given to the paper backing for abrasives as well. That backing plays a role when dealing with fine details like the contour of a railing or a raised panel on a cabinet door that can’t be sanded effectively with a sander.

Festool’s Granat abrasives line also offers unique sponges and rolls for hard-to-reach corners. It comes with a thinner backing, almost as thin as aluminum foil, Frick said. 3M’s Ultra Flexible Sanding Sheets and Rolls use a thin, urethane backing instead of paper, which allows it to be tear and puncture resistant—and extremely flexible.

“It really has changed the game for pros when it comes to sanding details,” Petersen added.

Sanding sponges also can be used for detail work. The same clogging problems tied to sandpaper, however, also apply to sponges.

3M recently developed an Ultra Flexible Sanding Sponge with grooves in the face of the sponge. Petersen explained that the grooves channel the dust away from the abrasive surface, reducing airborne dust, and significantly increasing the life of the sanding sponge.

GETTING A HANDLE ON GRIT

Grit choice can also play a role in how well a job turns out and how well the abrasive performs. Painters have often turned to CAMI (Coated Abrasives Manufacturers’ Institute) grit ratings to understand which sandpaper is best for which job. In general, the lower the number, the coarser the sandpaper is.

CAMI ratings in the 40 to 60 range are extremely coarse and are used for heavy removal applications like stripping floors. Fine-grit ratings can start from about 200 and go up to 600 for super-fine applications like polishing work.

To help simplify the grit choice, Norton created a color-coding system for use on its ProSand Multi-Air Cyclonic Sanding Discs:

Spreadbury said the color system has helped to better inform pros and those new to the industry. “Most pros know what to use, but we still put it on there because a pro could be someone using a certain grit for years out of habit … but there might be a better grit sequence that can work for a job,” he says.