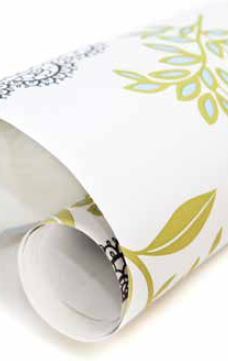 Depending upon your age, you may remember that in the ’70s and early ’80s, wallpapers featuring blue geese and lots of florals were the must-have in many homes.

Then, in the late ’80s, pre-pasted wallpaper hit the market and homeowners slapped up even more paper and patterns. Fast-forward five or so years later when those same DIYers grew tired of their must-have motifs and attempted to remove it themselves.

“To say they didn’t know what they were doing is putting it mildly,” says Vincent LaRusso, president of the Wallcovering Installers Association (WIA). “They didn’t just make a mess of the job, many actually ended up damaging their walls. And that was pretty much all it took to give wallpaper a bad name.”

However, in the past few years, major manufacturers have begun to note an appreciable uptick in interest and sales.

Jon Sherman, president of Flavor Paper, says his company has enjoyed a major bump in sales in recent years, and especially this year.

“It’s been a blend of commercial and residential work; more residential jobs numbers wise but bigger budgets on the commercial side,” says Sherman. Sherman attributes the increased interest in wallcoverings to the fact that you can do a lot aesthetically with them. “Compared to paint, wallcoverings offer more variety, depth and branding opportunities. With digital technology, you can customize coverings to reinforce your brand and add interest to the workplace. For example, instead of painting their conference room walls white, Google has a foggy San Francisco bay mural on the wall … conveying brand essence is much more of a millennial way to build recognition as opposed to the old-school ‘here’s your logo’ approach.”

According to Greg Laux, technical director at MDC Wallcoverings, “MDC’s commercial sales are tethered to the health of the economy and hospitality. When the economy was slow between 2008 and 2010, many hospitality companies put a hold on renovations. But when things turned around in 2011, renovations kicked back into high gear and sales have been very positive ever since.”

Laux notes that wallcoverings are the go-to choice for hospitality venues due their durability and design.

“You can take an aging property and literally transform a hallway overnight in a way you simply can’t with paint. Plus, wallcoverings hold up to maid carts and luggage bumps much better than even the most durable paint,” says Laux.

Thanks to innovations in production and design, wallcoverings make it possible for customers to achieve any look or vibe they want.

“Natural themes are really big on the residential side,” says Laux. “You can get coverings made from wood, stone, bamboo, grasses, and virtually every kind of bark, including banana bark.”

Sherman notes a growing interest in oversized florals and color-changing inks, and adds that LED coverings are really trending. Literally embedded with LED lights, these pricey coverings bring a bit of drama and a lot of ambience to a space.

While these new innovations answer a number of specific consumer desires, they’re often too delicate for commercial use, and require professional installation.

Formerly known as National Guild of Professional Paperhangers, the 600-member WIA is where both buyers and manufacturers turn for professional help. LaRusso says, “Coverings are evolving so quickly that it’s important for pros to stay current on techniques specific to different manufacturers. The WIA offers accredited courses ranging from the basics of installation to handling highly specialized papers.” WIA’s member directory is accessible to consumers and manufacturers.

Sherman of Flavor Paper adds, “Finding qualified installers isn’t always easy. But when customers ask, we send them to the WIA.”