What to Expect When the Government Inspects 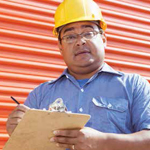 Though there’s only a small chance you’ll be faced with an Occupational Safety & Health Administration (OSHA) inspection at some point in your career, all painters need to be prepared for one, especially if they work on large commercial building projects that are likelier to attract OSHA inspectors for other reasons. Scrutiny of the framers’ or plumbers’ work, for example, could lead to a review of your work. So it’s in the best interests of professional painters to make sure they’re OSHA-compliant.

“If OSHA is called to inspect a large commercial construction project for any reason, then all the trades working on the project will be looked at,” said Dev Pontious, owner and president of Seattle Painting Specialists. He has been through a couple of brief OSHA inspections during his 26-year career. “Being familiar with OSHA regulations demonstrates that we, as painters, care about our profession and the health and safety of our employees. I endorse OSHA and the regulations in place,” he said. “I appreciate that they’re trying to keep workers and the public safe.”

The most likely reason for an OSHA or state-led inspection of a professional painting business is a referral (someone reporting unsafe working conditions, for example) or a catastrophe, such as a worker death or long-term debilitating injury, explained Elizabeth Milito, senior executive counsel for the National Federation of Independent Business (NFIB).

INSPECTIONS OF PAINTING OPERATIONS CAN HAPPEN WITHOUT WARNING

“Typically, a contractor won’t get much advance notice of an inspection,” Milito said. “An inspector will just show up on your doorstep unannounced after a complaint has been filed or a serious safety incident has occurred.”

States are encouraged to develop and operate their own job safety and health programs. OSHA approves and monitors state plans and provides up to 50% of an approved plan’s operating costs.

Washington state is one of the 22 with its own state plan. “I wasn’t even on-site when an inspector drove by one day, years ago, and noticed that one of the members of my crew was not using a ladder properly,” said Pontious. “The inspector stopped, got out of his car, and told the crew members that both legs of the ladder must be extended before a person starts climbing it.”

The OSHA regulation says this: “A metal spreader or locking device shall be provided on each stepladder to hold the front and back sections in an open position when the ladder is being used.” Pontious said he can’t even remember if a fine was levied or not.

OSHA inspectors are most interested in making sure workers are protected from falls and that the hazards of various chemicals, including paints and solvents, are communicated to employees, Milito said.

A guide to OSHA inspections, written and distributed by the NFIB (available at NFIB.com, search OSHA inspections guide), points out that OSHA performs inspections in two general situations. In addition to inspections after a major accident or event, or in response to a complaint, OSHA develops lists of worksites from all industries with injury and illness rates at or above certain levels, and chooses worksites from that list to inspect. This type of inspection usually occurs at worksites with 10 or more employees.

To reduce the risk of an adverse outcome with an OSHA inspection, the guide says the best approach is to prepare in advance by knowing what to expect during an inspection and by readying responses to routine requests or questions.

A common issue during an inspection is accurate and consistent communication with the inspector, Milito said. “It’s critical that a smaller business designates one person to be the point of contact with the inspector,” she said. “That person might be the owner or a manager, but it should be the person who is best versed about the operation of the business.” A company decision maker who focuses on the safety of the worksite often serves as the principal contact person, the NFIB Guide to OSHA Inspections notes.

‘OSHA should be instructed to submit all written document requests to this contact person,’ according to the NFIB guide. In addition, the guide reads, ‘the contact should be responsible for scheduling all requested employee and employer interviews, gathering and producing any requested documents, and coordinating the arrangements for OSHA’s worksite tours.’

Milito said if an inspector contacts you, it’s probably a good idea to hire an attorney who specializes in regulatory compliance and is specifically knowledgeable about OSHA regulations. “On the other hand,” Milito said, “if you’re confident you’re in compliance, maybe you won’t need an attorney.”

Although “most painters won’t have to contend with an inspection during their career, it is still a contractor’s responsibility and obligation to have a basic understanding of the standards OSHA expects to be met,” Milito said. “Training your employees in best practices so that everyone stays safe and is committed to a safe working environment is very important,” she said. Yet, she acknowledged, it can be difficult to keep track of all the pertinent regulations.

Pontious agrees. “What an inspector tells crew members can be instructive,” he said. “We really want a safe working environment.”

The NFIB Guide to OSHA Inspections points out three other important things to keep in mind if you’re ever faced with an OSHA inspection. First, the inspector (also known as the compliance officer) should be accompanied by you or another representative of your company—perhaps the designated contact—when he or she is touring the job site where the incident may have occurred. During the walk-around, the guide says, the compliance officer must be required to follow all safety rules that apply to visitors, including wearing safety equipment.

Second, try to keep most of the compliance officer’s impromptu conversations with employees to three to five minutes, because longer conversations can be disruptive and distracting. If the compliance officer requests a longer conversation with any employees, the designated contact person should schedule those ahead of time. The employer is entitled to have a representative present for all interviews with company decision makers, including supervisors, the guide says.

Third, the employer has the right to insist that the government protect any trade secret or business’ confidential information in the course of the inspection. The business owner may affix a label or statement to any photo or document gathered during the inspection, declaring that the material is confidential. Anything you wouldn’t share with a competitor qualifies as confidential. Unique formulas or processes can be considered trade secrets, the guide says.

Being prepared for an inspection, by anticipating issues that are likely to arise, makes it easier for the employer to be proactive in addressing OSHA’s compliance concerns, which ultimately may persuade OSHA not to issue citations, NFIB’s guide says.

Most small business owners “will operate without any government inspection for years,” Milito said. “But it’s still smart to be prepared in the unlikely event you’re faced with one.”