Could Owning a Franchise Be Right for You? 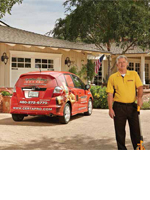 Professional painters can operate their business either as an independent owner or as the owner of a franchise location. Sometimes deciding which approach is best can be challenging, because there are rewards and drawbacks to both options.

Franchising can be the right choice for many painting professionals. Keeping in mind that the vast percentage of painters aren’t affiliated with one of the more than half-dozen painting franchise companies around the country, it’s also true that hundreds of small-business owners have decided that buying a franchise is an optimal arrangement.

One of those is Jimmy Zeski of Fresh Coat of Summerville, South Carolina, a suburb of Charleston. He was a part-time painter for 11 years until 2011, when he chose to devote all his time to the painting business. He purchased a Fresh Coat Painters franchise because he “had grown about as much as I could on my own.”

Randy and Irma Bressler of Gilbert, Arizona in suburban Phoenix, also decided to buy a franchise. Though neither is a professional painter, they were looking for a business to own and operate after spending years in the corporate world as employees. Between the two of them, they had diverse backgrounds in management. Randy had worked in newspaper advertising sales and Irma had worked in IT client support. “We felt like we couldn’t come up with a concept that blended our skills very well,” Irma said. “That’s why we turned to franchising.” They considered window cleaning, fire and water damage restoration, and home health as options, but ultimately concluded that residential and commercial painting was a good fit for them. Now, more than two years into their franchising arrangement with CertaPro Painters, the nation’s largest painting franchiser, they couldn’t be happier.

HOW DOES FRANCHISE OWNERSHIP WORK FOR PROFESSIONAL PAINTING CONTRACTORS?

Franchise company executives say painters must be prepared to hang up their ladders, giving up the painting they themselves have been doing so they can, instead, focus on building their business. “You have to be willing to change how you work,” said Paul Flick, founder and president of 360° Painting, an Alexandria, Virginia-based painting franchise company with 44 franchisees in 14 states. “We want owners to concentrate on marketing their business and using the software we make available to them to produce profitable customer contracts,” Flick said. “We have developed an entire program that can help owners grow their businesses exponentially. But if someone isn’t willing to follow our system, and they want to personally continue painting, then franchising probably isn’t for them.”

“We give owners a comprehensive business strategy for success that lets them take their business to the next level,” said Bernie Brozek, president of Fresh Coat Painters, which is headquartered in Cincinnati, Ohio. Franchise owners can build Fresh Coat’s volume discounts on paint costs into estimates for their customers, Brozek said, adding that all franchise owners use the company’s cloud-based software to help run their businesses. Fresh Coat has 111 franchisees in 30 states and one in Canada, he said.

WHAT ARE THE ADVANTAGES OF BUYING AND OWNING A FRANCHISE?

The foremost advantage, say the franchise company executives, is the potential to increase your annual revenue nearly six-fold. “The average painting franchise produces more than $400,000 a year,” Flick said. “A lot of great painting contractors could benefit from having a painting franchise and we can benefit from them, especially if they already have a customer base.”

“Our owners appreciate the operational support they never had as an independent contractor,” Brozek said. “A lot of people, at first, think they can run a successful business without being part of a franchise company, but they discover they can’t.” Painters in particular, who buy a franchise may “make so much money that they don’t want to paint anymore. They’re happy to run their businesses and let others paint for them.”

Zeski fits that description. He has seven full-time employees, though he sometimes misses doing actual painting himself. Since becoming a franchisee, his gross revenue has jumped between 30% and 40% compared with when he was an independent contractor. And, he said, he hasn’t given up any autonomy since becoming a franchise owner. “I’m very involved in the day-to-day operations of my business,” he said, and he’s making the decisions about support from Fresh Coat that it’s well worth it to have a franchise.”

He appreciates being able to call Fresh Coat franchisees in other parts of the country to talk about questions or concerns with his business. “Before, I was relying on other people in the industry and often, they wouldn’t really have time to talk to me,” he said. “So it’s great to be able to talk to people in the same situation I’m in.”

The support and camaraderie of fellow franchisees affiliated with the same company is a key advantage, Brozek said. Because franchisees don’t compete with one another, they can seek support from each other and problem-solve together, if necessary. Each franchise within a company is typically assigned a zone or territory so that competition among franchisees is eliminated, Brozek said.

CertaPro Painters and other companies operate in a similar fashion. “Before we agreed to purchase a franchise,” Bressler said, “we had the opportunity to talk to other franchise owners in our backyard. That went a long way in terms of performing our due diligence.”

Most painting franchise companies help franchise owners with marketing their business, generating leads, finding qualified painters, preparing project estimates, and spending less money on paint and supplies. “Franchising companies have a system that’s been proven to work over the years,” Flick said. “If you follow our marketing program, you’ll successfully grow your business.” Franchisees put an estimate together on an iPad or other tablet and print it for the customer right in the franchisee’s vehicle. “It’s much more professional looking,” he said, “than an estimate scribbled on the back of a business card.

“I believe our value proposition is that we elevate an existing business through additional lead generation, a proprietary software platform, and vendor purchasing power,” Flick said. “And we provide customer phone support 24 hours a day, so if there is ever a question or a concern, the customer will always be able to reach someone at our call center rather than possibly having to contend with an independent painter’s full voicemail box.”

If you’ve ever thought about buying a franchise, you’ve probably wondered about the costs involved. Among the more than half-dozen painting franchise companies in the U.S., the franchise fee (what you pay initially to purchase the business), the royalty (the percentage of your annual revenues you pay to the franchiser), and the minimum monthly royalty can vary widely.

Fresh Coat Painters charges $39,900. Flick’s company, 360° Painting, charges as little as $10,000 if the franchise owner already has an existing painting business. “We reduce our franchise fee to get you into the system,” said Flick, whose company charges a 6% royalty on annual revenues with a minimum royalty of $400 per month. Fresh Coat Painters also charges a 6% royalty on annual revenues with a $300 monthly minimum, Brozek said. CertaPro Painters’ current franchise fee is $52,500. Franchisees pay a monthly 5% royalty to the company and contribute 3% into a national advertising fund.

Most painting franchise companies ask for a 10-year signed agreement, Flick and Brozek said, and most ask that you sign a non-compete clause in the event you terminate the contract early, meaning you can’t reopen your independent contracting business for a period of time. Fresh Coat Painters, for example, requires a two-year noncompete agreement.

And here are a couple of other statistics to consider: 1) According to Fresh Coat Painters, in 2013 a total of 3% of its franchisees left the system; half of that 3% were due to illness. The national average that leaves the franchise industry every year, said Fresh Coat’s Director of Franchise Sales Administration, Beth Boecker, is 10%. 2) About 85% of 360° Painting’s franchise owners are not painting professionals, Flick said. “Most of our franchisees come from the corporate world,” he said, “and about 15% come through our conversion program as experienced, successful painters.”

THE PROCESS OF BECOMING A FRANCHISEE

Most of the painting franchise companies are as careful about selecting their franchisees as the prospective owners are about choosing them. The four- to six-week process starts with educating yourself, Flick said. “Our web site has plenty of information about the industry, videos and testimonials,” he said. “So the process begins with learning about the industry and about the opportunity to buy a franchise.” Someone interested would submit a request for additional information, he said, and that prospective franchisee would be encouraged to thoroughly review information sent to them upon their request. The prospect also receives an email with a brochure and newsletter attached and, at the prospect’s request, a phone call will be arranged so that questions can be answered, Flick said. Then, the prospect might attend an online webinar where the built-in training, support and tools used (estimating software and other software platforms, for example) are further explained. Next, a ‘mutual discovery day’ is held, where the prospect travels to the company’s headquarters and franchise disclosure documents (these are federally required and are known as FDDs) are presented and signed if both parties believe it will be a good fit for the prospect to become an owner.

“We guide the franchisee through everything, before and after the purchase of a franchise,” Brozek said.

ANOTHER PERSPECTIVE: PAINTERS WHO DON’T WANT TO FRANCHISE

Even with all the guidance, a franchise isn’t right for everyone.

Some Pros simply don’t want to give up the time with the brush or roller. Others don’t feel the pay structure, including the initial fee and annual royalty, works to their advantage. However, franchise organizations argue that the structure, business tools, etc. they offer help business owners appreciate savings—and profit—they might be missing on their own.