FINDING A HEALTHY BOTTOM LINE IN THE HEALTH CARE MARKET 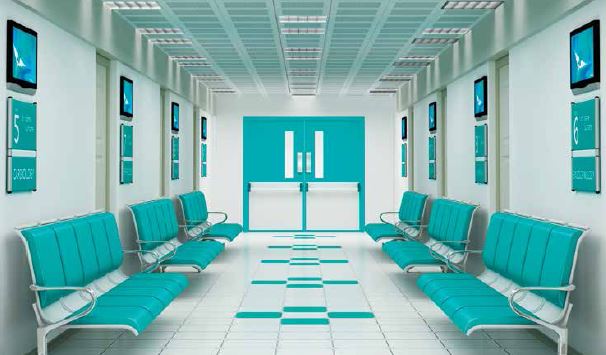 A good contractor knows which crews to trust for complicated jobs; however, there are some jobs that may not be technically difficult, but require a crew with great people skills to handle a tough customer.

Jim Guthrie, senior project manager for Hester Painting & Decorating, near Chicago, IL, has one of those crews, and recently used the team to pull off a touchy job at a psychiatric ward. Tasked with painting new dry-erase boards in rooms, the team had direct contact with psychiatric patients and staff at times.

“The patients were very curious about what we were doing and were asking a lot of questions. Then you had to keep an eye on your tools, all while being polite, of course,” Guthrie said.

It’s one example of how health care work brings some unique challenges. But for paint pros, it can be an arena that produces steady, profitable work over the long haul. It has done just that for Hester Painting & Decorating, and helped the company through the recession from 2008 to 2012. “We saw a lot of private construction in the health care market, which seemed to weather things really well for us,” Guthrie noted.

He and other paint professionals recently shared insights on some of the unique situations that arise on health care jobs, and how you can stay competitive and profitable in this high-demand niche.

He notes it’s important to walk a job thoroughly before bidding. “Many of these facilities are very sensitive to environmental change. You have to encapsulate and isolate areas and you need an experienced staff that knows what to do,” he said. In addition, he notes, “You also need to make sure you know when products needs change from one building or floor to the next.”

And while green products with low- or zero-VOCs are a given in these environments, odor is another factor. Often, a low-VOC product may be spec’d but it may still have an odor. Dry time and ventilation could be major concerns, too. You must factor into the bid that crews may need to work evenings or overtime to keep fumes away from patients.

Nathan Ferraro, a Rust-Oleum product manager, is quick to direct pros to the company’s Sierra Performance product line for winning health care jobs. The zero-VOC, zero-HAPs (hazardous air pollutants) product is a hit in this environment specifically because of its low odor.

“You don’t have to clear out a wing of the hospital. … It basically allows for continuous use of the space without having the offending odors that might be associated with new paint,” he added.

For health care facility repaint work, it’s common to find facilities managers more heavily involved in the product spec process, whereas in the past, architects and engineers were often the point people, according to Robert Ryan, president of Troy, NY-based Frank J. Ryan & Sons Painting.

The long-time commercial painter says it’s a welcome change, as facilities managers are closer to major decision-makers. “In the end, you want to make the owner happy. Being able to deal directly with his facility people is advantageous to us,” he said.

Brew says it’s important to keep in mind that a facilities person can often be overwhelmed by taking bids while tending to other daily requirements of their job. “They’re dealing with flooring, windows, landscapers, etc., and they’re getting bids for each. … You want to make everything as seamless as possible for them.”

Brew also takes the time to study a company’s decision-makers or facilities people that solicit bids, before working with them. He will look people up on LinkedIn and do online research to best understand the manager’s needs before meeting the person and submitting a bid. “I use the best and highest resources I can to identify a decision-maker,” he added.

For new-construction and renovation work, Guthrie says it’s important to understand the schedules of other trades, and how they can shift and change. The paint pro’s job usually has a smaller time window than other trades that may be overhauling or building actual rooms in buildings, he adds.

It’s particularly important to keep an eye on schedules for jobs being done in phases. In these situations, a paint crew may be on-site for one section of the job, then have to completely demobilize while another area of the project is built out, only to come back later.

“You want that same crew on the next phase, if possible, but you may have them on another project when the next phase is ready. New guys may need new badges and have to go through safety training, which you’ll often see for health care jobs. That’s all time and money,” Guthrie said.

When doing your due diligence for a health care job, Ferraro recommends paint pros familiarize themselves with LEED (Leadership in Energy and Environmental Design) standards and ask if the customer is seeking certification. If the building owner uses a low- or zero- VOC product, they may be able to earn credits toward LEED certification and see valuable tax breaks that may come with that designation. A paint pro could help a building owner better understand these requirements and potential benefits.

Pros don’t need to go it alone when it comes to recommending products either. Tap company reps to walk jobs and offer guidance. Ferraro also says, if a job does not have a specific brand spec’d and a facility manager is looking to the pro for guidance, look for third-party inspected products. For example, Rust-Oleum’s Sierra Performance line is Green Seal certified. The line also has the only Green Seal-certified epoxy on the market, Ferraro added. It’s a green product that can be used in areas that require a durable product—specifically surgery rooms and other spaces that are frequently washed down. Ferraro says understanding the uses of certain rooms is critical, too.

“Make sure you understand what’s being expected of the coating,” he added. “If it’s going to just be put on a wall and needs to be zero odor that’s great, but if it needs some performance characteristics in some areas, you need to know that. Maybe it’s going to be next to a window and you need it to be good for UV. It’s all good information to have so that the right products are selected for the job.”

Sherwin-Williams’ Paint Shield is a newer green coating gaining popularity in the health care market. It’s touted as the first EPA-registered microbicidal paint that kills more than 99.9% of Staph, MRSA, E. coli and other bacteria within two hours of exposure to the painted surface.

“By killing these specific bacteria on painted surfaces, it offers customers an important new tool to help prevent the spread of bacteria that can cause hospital-acquired infections,” said Rick Watson, Sherwin-Williams’ director of product information and technical services. The manufacturer’s Pro Industrial Water Based Catalyzed Epoxy, Harmony, Emerald, and ProMar 200 Zero VOC paints are other popular requests for health care jobs, Watson added.

When walking the job, Ryan also suggests pros look closely at the process required to apply a coating.

“You need to understand if there are any specialty coatings on the project. Some require lengthy, four- or five-step processes and you need highly skilled guys to install it; things like an epoxy-mat system in an operating room, for example,” he noted.

“I would just say ask good questions, listen and respond based on what they tell you,” he said.

Brew also likes to ask questions about what a previous paint team did right and did wrong.

“You can learn about the facility manager or the owner’s hot-button issues. I ask about what a previous contractor lacked. They’ll say things like ‘Well they filled up my dumpster with their stuff.’ That’s really important to understanding the job,” he added.

Like other commercial work, building relationships with owners and their representatives can take time. For that reason, Ryan prefers to work directly with an owner and is selective about which general contractors he works with, too.

“If you can build a relationship with an owner and are responsive to their needs, they’ll be loyal to you,” he said. “With a general contractor, if he’s not performing or other subcontractors aren’t performing, you have to be careful because you can be brushed in with the same broad brush.”