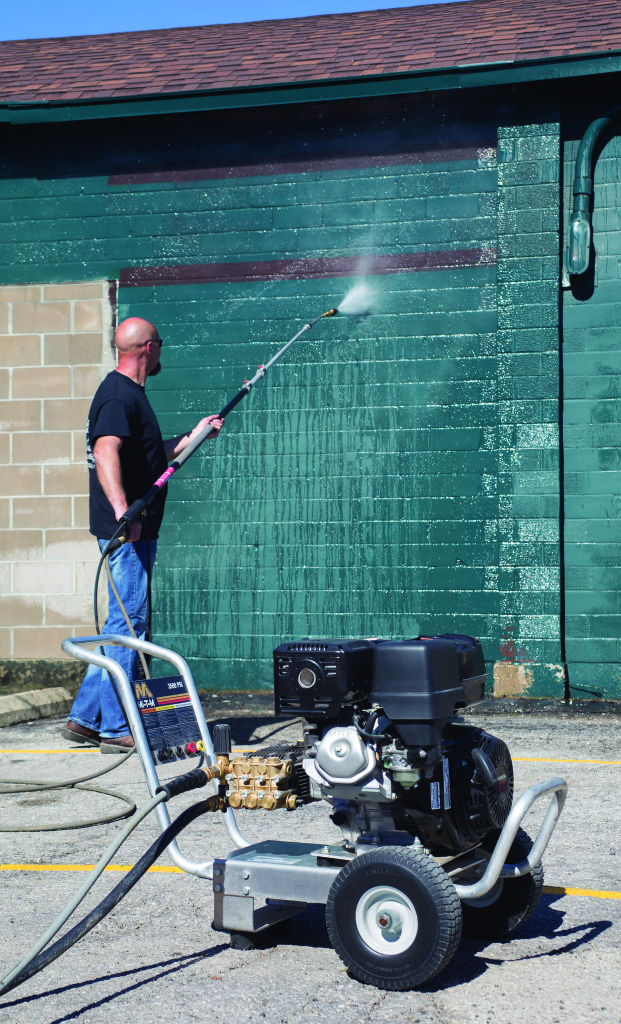 Like most equipment, finding the pressure washer that fits your painting business’ needs is a matter of striking balances between a number of different factors: the types of substrates you most frequently encounter; the amount of prep work you do on a weekly basis; portability needs; and your budget—to name just a few.

“You hear constantly that time is money, but customers expect the job to be done right,” says Bill Fischer, VP industrial sales at The FNA Group, which manufactures Simpson pressure washers. “You can be the best painter in the world, but if you’ve got a peeling substrate, there’s nothing you can do. Paint prep is key—especially given the cost of paint, and no other tool can accomplish the same task better than a pressure washer.”

While there are literally thousands of different options when it comes to choosing a pressure washer to remove dirt and scaling paint from surfaces, the choice really comes down to deciding between a few basics:

Direct drive vs. belt drive  Years ago, based on the way pressure washers were designed, belt drive was the only way to go in a professional application. Belt drives turn the pump at a lower number of revolutions per minute (rpms), whereas direct drives run at the same speed as the engine: around 3500 rpms when under load. “The reputation was that direct-drive pumps simply didn’t last as long,” says Fischer. “But the pump designs nowadays are much better, so it’s a matter of looking at trade-offs.” 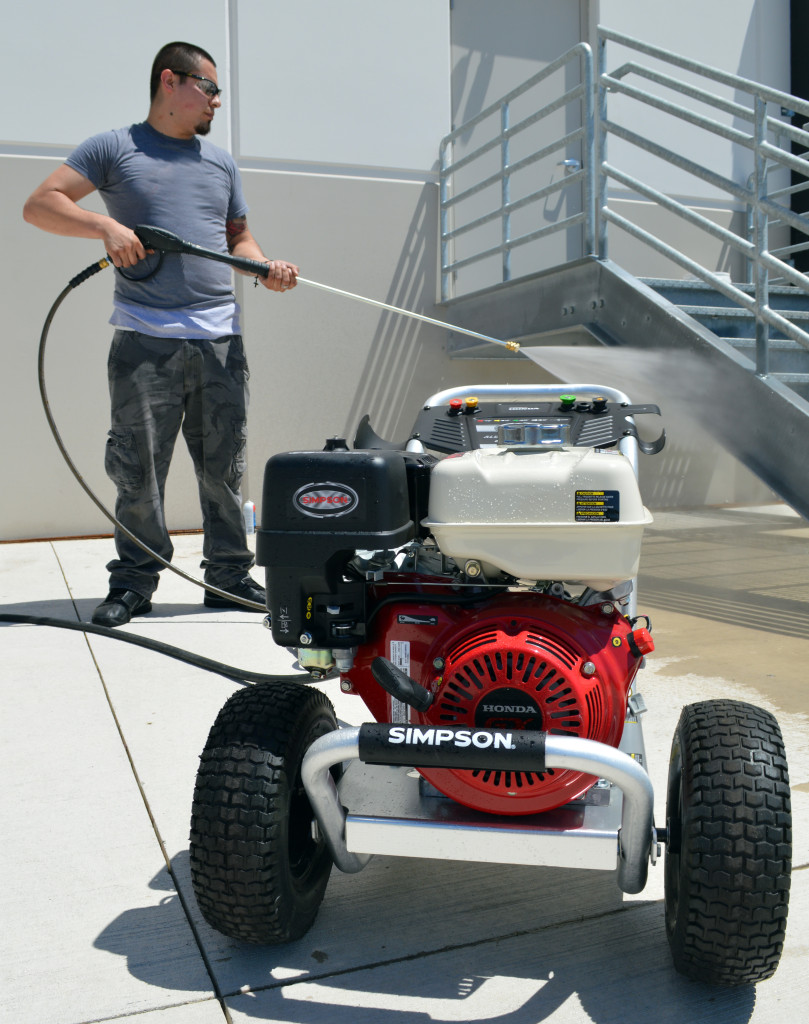 If it’s a suitable option, direct drive offers a number of advantages: lower cost, easier pump replacement, and lighter, less-cumbersome units—easily loaded and unloaded into a service vehicle by a single person.

On the negative side, direct drive transfers more heat from the engine to the pump, which shortens its life. An engine failure or pump failure, which would simply break the belt in a belt-drive machine, can cause a more significant—or even catastrophic—problem in a direct-drive machine.

The exact figures depend on the make and model of pressure washer you choose, but experts say the dividing line is around 20 or 30 hours of continuous use per week that would indicate the belt drive is the better bet.

Pressure ratings and gallons per minute  These two factors need to be considered in relationship to each other, according to Don Holdridge, national paint division manager at Mi-T-M Corporation. “It comes down to a mathematical equation,” he says. “You take the pressure per square inch (psi) and multiply that by the gallons per minute (gpm), and that gives you a quantifiable number to compare how much surface you can clean.” For example, if you make a side-by-side comparison, a machine rated at 4000 psi and 3.6 gpm is capable of cleaning more than twice as much area as one that’s 3000 psi and 2.4 gpm.

Construction and components  For most painting contractors doing exterior work, gas engines win by a landslide over electric. “Hands down, gas is preferred,” says Terry Connett, director of sales and marketing at Pressure-Pro, Inc. “Using a regular 110-volt socket, the best performance you’re going to get is 2 gpm at 1500 psi—that’s the max. Even a small gasoline unit with 6.5 horsepower beats that performance by more than 50%.”

It’s also important, however, to look at the specific engine. You’ll see the same brand names—Honda, Briggs & Stratton, Kohler—and even the same horsepower ratings, but a paint contractor will want to make sure they’re getting the commercial-series engine, not the residential.

The same principle applies to the pump you choose. “There’s a dramatic difference in life duty between the axial cam, which is the residential level in direct drive, versus the plunger type or crankshaft type,” says Fischer.

Warranties  In general, the further you go up the commercial ladder, the better and longer the warranties that are available—particularly compared to the homeowner units. For high-end washers, it may include several years’ coverage on the pump and engine and a lifetime warranty on the frame, for example.

SO, HOW DO YOU DECIDE?

Not surprisingly, a contractor-grade pressure washer that cleans twice as much surface area in the same time may be quite a bit more expensive as an initial investment. “Over the course of its life span, the more expensive, bigger machine—depending on your jobs —is going to save you time,” says Fischer.

Ultimately, it comes down to the substrate: Are you cleaning stucco in Phoenix or old cedar siding in New Hampshire? Using too much pressure or getting the nozzle too close can result in damage repair rather than a quick, efficient cleanup; too little pressure means poor efficiency and wasted time. As a result, you need to consider the size and application, as well as the duty cycle. A top-end, contractor-grade unit will clean just about anything out there—and can always be dialed back— whereas a 2000 psi machine hits its limit early. (In addition, many lower-end units can’t be adjusted.)

“The most popular type of washer in our market is gas-powered, with 4 gpm water usage and 4000 psi,” says Connett. “Hands down, that’s the leading specification in many styles. But even more than the amount of power, you need to make sure you’ve got the best-quality components, because it’s an investment in your business.”

Having trouble choosing just one? Some painting pros solve that by having a main workhorse unit with high-end specs—and a lower-powered backup unit for smaller jobs or jobs where less pressure is more appropriate.