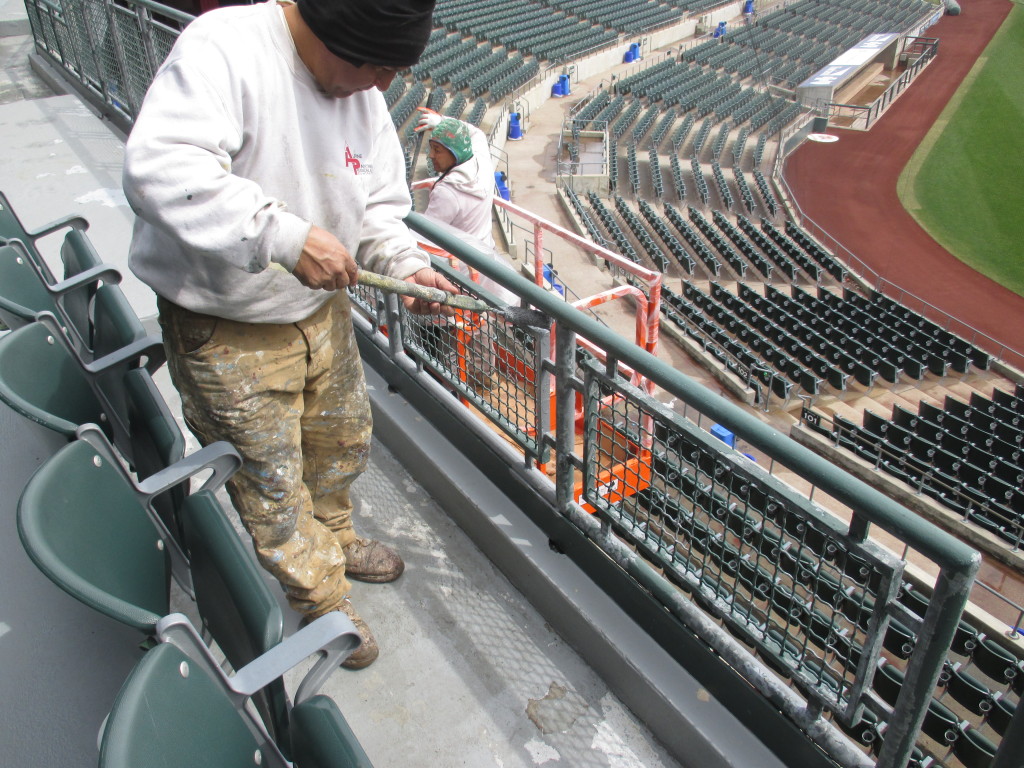 Some of the advantages of shifting into commercial painting are obvious, such as larger job sizes and the potential for recurring projects from property managers or general contractors who like your work, which in turn reduces your marketing costs. And, of course, commercial jobs have a reputation for being more profitable—under the right circumstances.

“I really like the fact that commercial work means sophisticated buyers,” says Aaron Moore, president of Precision Painting & Decorating in Bellwood, IL. “A homeowner just knows they need their house painted, which usually comes down to price. With a commercial buyer, their job is on the line—going with someone cheap who screws it up is way worse for them than spending a couple of extra dollars.”

Henry Dryfhout of St. Thomas, Ontario-based H.D. Painting notes that you can also scale a commercial operation more easily. “If you have a residential project for $5,000 and you’re yielding 25% or 30% gross profit, versus a commercial project that’s $20,000 at the same margins, your input time and costs aren’t that different. We found our profitability increased as we got better at managing, bidding, and knowing clients’ needs, and those volumes allowed us to scale.”

Commercial work can also help smooth out your revenue curve, particularly for areas of the country most affected by weather. “When winter comes and things slow down in residential work, the budgets are still there in commercial,” says Frank Prusik, Jr., owner of Prusik Painting Company in North Reading, MA. “A lot of companies have use-it-or-lose-it budget situations at the end of the year, so painting is an easy way to spend it.”

Experienced commercial painters recommend starting small and working your way up. “You need to have a clear focus, changing your brand and marketing initiatives to be focused on the commercial market,” says Dave Scaturro, senior estimator at Alpine Painting & Sandblasting in Paterson, NJ. “Customers need to feel confident it’s what you do regularly, not that you’re a residential guy who dabbles in commercial.

“There’s a natural progression to go from single family into the condominium or town house market, or doing mid-rise multifamily properties,” he says. “This market is very competitive, so it’s probably advantageous to join a trade association with a lot of property managers so you get face time with decision makers.”

“I use the analogy that you’re a fisherman and you need to live off what you catch,” Moore says. “Get some bluegills first—like smaller retail businesses or strip malls—before you go after a muskie or northern pike. And even then, don’t go after 10 contracts at one time.

Gina Koert, principal/senior estimator and project manager of Shamrock Painting, Inc. in Denver CO says, “The reason I like general contractors is the opportunity for future work with direct-owner clients,” she says. “If you stay in good standing and develop a relationship, the owner will come directly to you. I know a lot of people cringe because you don’t get the 50% deposit, but I think the long-term relationship and cash payout is worth it.”

Similarly, Prusik suggests networking at the property where you’re painting. “My business started to grow with commercial leads from some of the guys who worked there, like maintenance guys and so forth,” he says. “They’d leave and go to a new company, and it would open the door for me there.”

Estimating is one of the most complex aspects of commercial painting, and it can create a make-or-break situation. “Too high, you don’t get the job; too low, and you don’t make enough to sustain the company,” says Scaturro, who recommends the PDCA estimating guides as a good foundation. “If you don’t take the time to look at the project on a unique level—markets, substrates, production rates, material spread rates—you’re going to miss something.”

Investing in technology can help streamline those processes and make them more accurate, Koert says. “Technology is the biggest thing that helped us move to the bigger projects. Digital estimating systems will significantly improve your production—you can do a takeoff in a third of the time.”

The financial considerations, particularly access to capital, are an absolutely critical area in commercial painting. “If you have four full-time painters taking 600 hours in two months to do a job at $25 an hour, you’re talking about tens of thousands of dollars before you get your first dollar,” Moore says. “Multiply that by five or six projects, and you could be out $150,000 in a month, depending on the projects and how they’re staggered.

WHERE YOU NEED TO BE CAUTIOUS

While commercial work can become an important— or even main—part of your revenue stream, experienced commercial painters will tell you it’s also essential to diversify your portfolio. “Don’t just go for all big projects, and don’t get bogged down with all little ones,” says Koert.

Prusik speaks from experience about the value of diversity. After more than a decade of steady work for an office park client, the management company decided to sell every building they owned. “Unfortunately, I didn’t have an in at the new company,” he says. “I lost a good $250,000 in income and had to scramble to keep things going. Luckily, I always kept my feet in both residential and commercial. My mix is about 60/40 now, and 2016 was my busiest year ever.”

The complexity of commercial jobs puts a premium on understanding the specs, as well. “We’ve all made mistakes, but I’ve seen contractors go bankrupt because they misread or didn’t read the specifications,” says Dryfhout.

Commercial painting has a lot of overlap with residential painting in the sense that it’s service based. “You need to listen when you’re walking through a project, and make the customer feel comfortable that you have the capabilities of performing on time and on budget,” says Scaturro.

It’s important to realize that, while service and job quality are the priorities, commercial buyers have different needs from their residential counterparts. Among the aspects that a professional buyer will be concerned with are scheduling and disruptions. Doing off-hour work means being responsible for keys to the property, disarming and activating alarms, and working around shutdowns.

Ongoing open communications are also paramount, such as delivering daily or weekly time and materials reports. Equally important is letting the owner, property manager, or general contractor know when there’s a problem. “Just be honest; people are people and they’ll understand.”